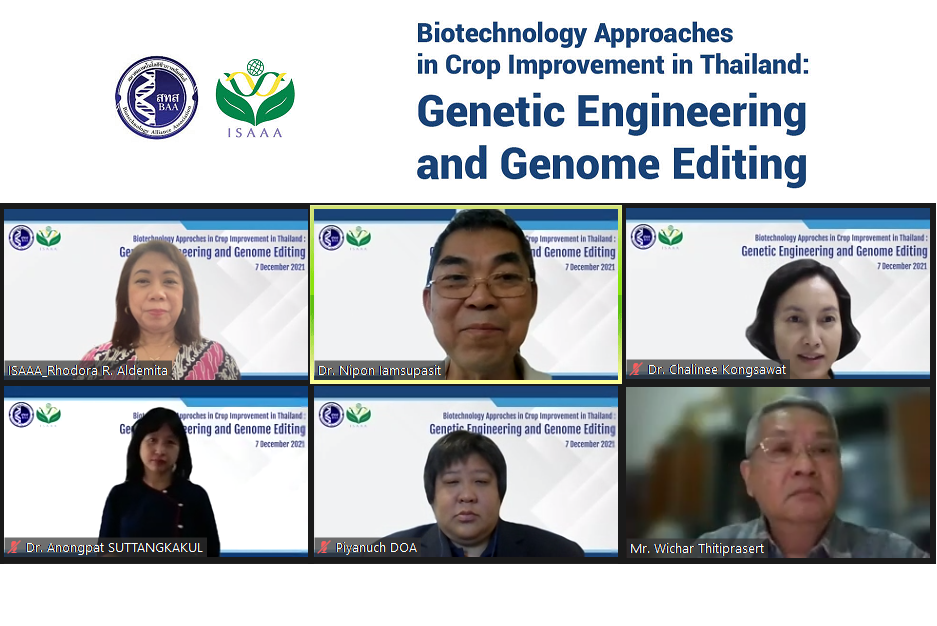 The webinar was hosted by Thailand's Biotechnology Alliance Association via Zoom on December 7, 2021. It was also streamed live on Facebook through ISAAA.org's Facebook accounts. Researchers and regulators from the country were invited as resource speakers for the webinar. Among them were Asst. Prof. Dr. Anongpat Suttangkakul of the Department of Genetics of the Faculty of Science in Kasetsart University, Dr. Piyanuch Sornchai of the Biotechnology Research and Development Office of the Department of Agriculture (DOA), and Dr. Chalinee Kongsawat, Manager of the Biosafety Section of the National Center for Genetic Engineering and Biotechnology. Dr. Nipon Iamsupasit, President of BAA, gave the welcome remarks. Also present was Dr. Rhodora Romero-Aldemita, Director of the ISAAA SEAsiaCenter, who provided an overview of crop biotechnology, its global adoption rates and benefits.

Asst. Prof. Dr. Anongpat Suttangkakul gave an update on the genome editing research and development at Kasetsart University. Their products in the pipeline include the salt-tolerant orchid, salt-tolerant sugarcane, high production Andrographis, haploid-inducer inbred cassava, non-browning pineapple, and high-nitrogen use efficienct cucumber. On the other hand, Dr. Piyanuch Sornchai presented the DOA's research efforts on genome editing which include the papaya resistant to the papaya ringspot virus, and non-browning pineapple. There is also research on RNAi technology, development of GMO detection methods through real-time PCR, digital droplet PCR, and detection method for surveillance. Dr. Piyanuch Sornchai also briefed the audience on the process on how to apply for the importation of GM crops intended for research.

Lastly, Dr. Chalinee Kongsawat gave a presentation about the current situation of biosafety in Thailand in which she explained that Thailand currently does not allow commercial planting of GM crops. GM seeds are only allowed in the country for research purposes. For food and feed, only GM soybean and GM corn grains are imported given that these are proven to be safe for humans and the environment. But more importantly, Dr. Chalinee Kongsawat gave an update that the Thai FDA has drafted a new set of regulations on the notification of foods derived from GMOs and on the notification on the labeling of foods derived from GMOs. She also discussed how Thailand's Plant Quarantine Act applies to genome editing. The topics were further appreciated during the open discussion that was moderated by Dr. Wicha Thitiprasert of the BAA Advisory. This was followed by the closing remarks of Dr. Romero-Aldemita.