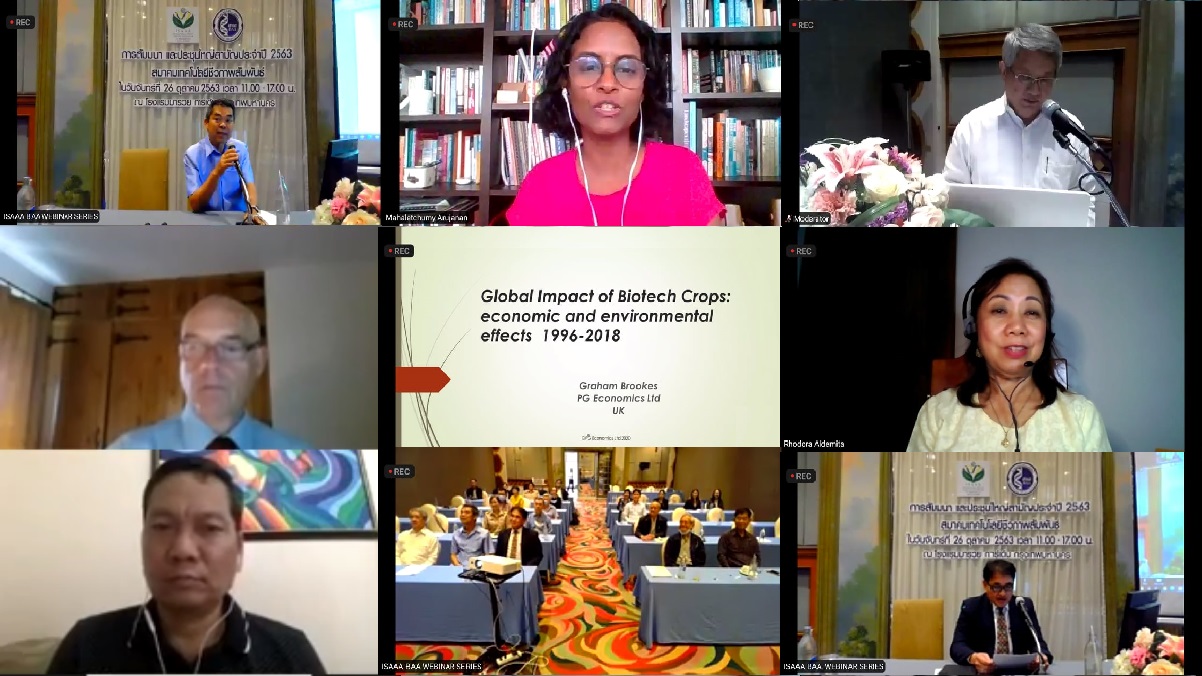 Renowned economist Graham Brookes presented the global economic and environmental impacts of biotech crops from 1996 to 2018 for Thai stakeholders through a live webinar organized by the Biotechnology Alliance Association of Thailand and ISAAA. The webinar also featured a multi-awarded Thai farmer who highlighted how biotechnology can help change the course of agriculture in the country.

Brookes is an agricultural economist and consultant with more than 30 years of experience in examining economic issues related to the sectors of agriculture and food. He specifically provided data about the impact of genetically modified (GM) maize in the Philippines and Vietnam, countries that are similar to Thailand in terms of climate and agricultural settings. For the Philippines, Brookes reported that GM maize with insect resistance, herbicide tolerance, and stacked traits had an increased yield impact of 5.3%, 18.2%, and 23.5%, respectively. The total farm income gain from 2002 to 2018 is USD 972.6 million with a production impact of 4.29 million tons. Vietnam, on the other hand, adopted stacked maize technology in 2015. As of 2019, 10.2% of maize in Vietnam uses this technology. It brought the farmers' average income gain from USD195.67 per hectare to USD329.75 per hectare, and almost doubled their average return of investment from USD6.84 per hectare to USD12.55 per hectare for every extra USD1.00 spent on the seed.

Dr. Rhodora Aldemita of ISAAA SEAsiaCenter gave a brief overview of the global status of biotech crops. Also present was Mr. Danai Narkprasert of the Biotechnology Research and Development Office of the Department of Agriculture, who reported the status of agri-biotechnology in Thailand and emphasized that Thailand considers biotechnology as an important agricultural opportunity and has included it in its National Science, Technology and Innovation Policy for 2012-2021 with multiple government agencies involved in the regulation of GMOs and its products.

Mr. Sukan Sangwanna of the Federation of Agricultural Safety also gave a presentation on the farmer's view on biotech crops. Sukan, who is a multi-awarded farmer in Thailand, believes that biotechnology is a solution to farmers' problems because it produces better-quality crops faster and more efficiently than conventional crops. Contrary to popular belief, Sukan said that farmers are not afraid of GM crops because they bring more advantages than disadvantages, and that both GM crops and biotechnology are known to be science-based. According to his presentation, it is the GM-opposing organizations, who are not farmers nor agriculture professionals, that object to the farmers' use of GM crops thus hindering Thailand's prosperity. Sukan also appealed to the Thai government to pass the Biosecurity Law of the country so that farmers will finally gain access to GM crop adoption.

The full webinar is available on BAA's Facebook Page.