RNA interference (RNAi) is a method of blocking gene function by inserting short sequences of ribonucleic acid (RNA) that match part of the target gene’s sequence, thus no proteins are produced. Since Science named it as “Breakthrough of the Year” and Fortune magazine hailed it as “Biotech’s Billion Dollar Breakthrough” in 2003, RNAi has significantly gained prominence as the method of choice for researchers sleuthing the structure and function of important genes.

RNAi has the potential to become a powerful therapeutic approach toward targeted and personalized medicine.  The range of diseases and disorders it might address is unprecedented; from cancer to cardiovascular diseases, neurodegenerative disorders and even HIV. Even more exciting is the potential of RNAi in agriculture. RNAi has provided a way to control pests and diseases, introduce novel plant traits and increase crop yield. Using RNAi, scientists have developed novel crops such as nicotine-free tobacco, non-allergenic peanuts, decaffeinated coffee, and nutrient fortified maize among many others.

Complete plant genome sequences has brought new dimensions in genetic modification to improve plant characteristics. Scientists believed that they could produce any gene products by just introducing foreign genes in plants, which was not always the case1. Plant biologists found out that introducing multiple copies of a gene that codes for purple petunia flowers led, not as expected to a deeper purple hue, but rather to plants with white or variegated flowers. Through an unknown mechanism, the introduced transgenes were silenced as well as the plant’s ‘purple-flower’ gene2,3. In another research, gene silencing was also observed when plants were infected with RNA viruses engineered to contain fragments of the plant gene.

The mechanism causing these effects was not known until American scientists Andrew Fire and Craig Mello discovered that injecting double stranded ribonucleic acids (dsRNA) into the worm Caenorhabditis elegans triggered the silencing of genes with sequences identical to that of the dsRNA4. They called the phenomenon RNA interference. Re-examining the co-suppression pathway in petunia and virus-induced gene silencing revealed that all these processes led to the accumulation of dsRNAs, hence the RNAi pathway. Fire and Mello were awarded the 2006 Nobel price for Physiology or Medicine for their discovery.

In addition to its roles in regulating gene expression, RNAi is used as an immune response to infection5 and as a natural defense mechanism against molecular parasites such as jumping genes and viral genetic elements that affect genome stability6. Specific types of bacteria have also been shown to trigger the RNAi pathway in plants. 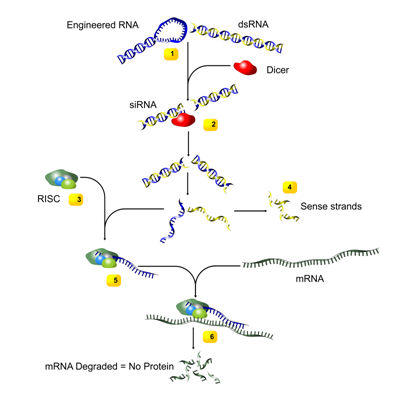 RNAi for Disease and Pathogen Resistance

RNAi has also been used to generate male sterility, which is valuable in the hybrid seed industry. Genes that are expressed solely in tissues involved in pollen production can be targeted through RNAi. For instance, scientists have developed male sterile tobacco lines by inhibiting the expression of TA29, a gene necessary for pollen development12. RNAi was also used to disrupt the expression of Msh1 in tobacco and tomato resulting to rearrangements in the mitochondrial DNA associated with naturally occurring cytoplasmic male sterility13.

A major challenge in the post-genomic era of plant biology is to determine the functions of all genes in the plant genome16. Compared to other techniques, RNAi offers specificity and efficacy in silencing members of a gene or multiple gene family. In addition, the expression of dsRNAs with inducible promoters can control the extent and timing of gene silencing, such that essential genes are only silenced at chosen growth stages or plant organs14, 15.

There are several ways of activating the RNAi pathway in plants. The various RNAi techniques have advantages and disadvantages with respect to how persistent their effects are and the range of plants to which they can be applied. These include the use of hairpin RNA-expressing vectors, particle bombardment, Agrobacterium- mediated transformation and virus-induced gene silencing (VIGS) 16.

RNAi has been used to modify plant metabolic pathways to enhance nutrient content and reduced toxin production (Summarized in Table 1). The technique takes advantage of the heritable and stable RNAi phenotypes in plants.

With RNAi, it would be possible to target multiple genes for silencing using a thoroughly-designed single transformation construct. Moreover, RNAi can also provide broad-spectrum resistance against pathogens with high degree of variability, like viruses9. Recent studies have hinted possible roles of RNAi-related processes in plant stress adaptation.

Although much progress has been made on the field of RNAi over the past few years, the full potential of RNAi for crop improvement remains to be realized.  The complexities of RNAi pathway, the molecular machineries, and how it relates to plant development are still to be elucidated.