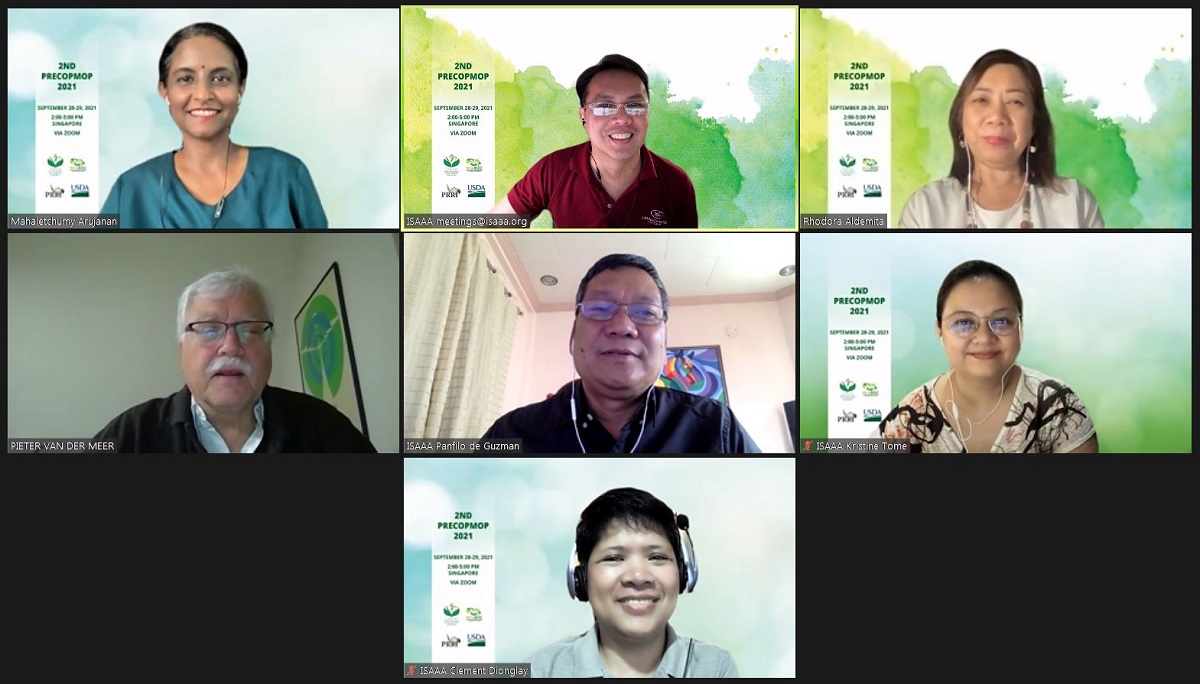 More participants were welcomed by ISAAA in its last webinar about the upcoming Conference of the Parties-Meeting of Parties (COPMOP) of the Convention on Biological Diversity (CBD). ISAAA and its co-organizers held the webinar to accommodate more participants who are interested in making their views and opinions heard as a means of taking part in the COPMOP negotiations on October 11-15, 2021.

ISAAA, the Malaysian Biotechnology Information Center, Public Research and Regulation Initiative (PRRI), and the United States Department of Agriculture, conducted the 2nd Virtual ISAAA Asian Regional Workshop on the CBD, its Protocols and the UN Biodiversity Conference 2021 from September 28 to 29, 2021 via Zoom. This is the second online workshop held in preparation for the COPMOP and was attended by more than 60 scientists, country regulators, students, and academic personnel. The activity is a follow-up virtual workshop of a similar online event by ISAAA held on August 4-6, 2021.

Prof. Piet Van der Meer of Ghent University, Dr. Gabriel Romero of the Philippine Seed Industry Association, Dr. Lucia de Souza of PRRI, ISAAA Global Coordinator Dr. Mahaletchumy Arujanan, and ISAAA SEAsiaCenter Director Dr. Rhodora Romero-Aldemita served as resource speakers during the event. Prof. Van der Meer provided a background of the CBD and its Protocols, the COPs, the MOPs, and the intersessional activities that happen in between, tracing back their history from the beginning. Dr. Arujanan informed the participants of the key biotechnology and biosafety items that are included in the next COPMOP agenda, while Dr. de Souza tackled the topic of Digital Image Sequencing. Prof. Van der Meer and Dr. Romero gave separate presentations on genome editing. Each explained the technology and its forms while providing a visual analogy about genome editing, as well as testing the attendees' understanding about it through audience participation. The webinar closed with an explanation about the next steps towards the next COPMOP meeting by Dr. Arujanan and the closing remarks by Dr. Romero-Aldemita.

The webinar's open discussions revealed that there is little participation coming from the public on biodiversity negotiations during the COPMOPs. The audience was then invited to contact their country representatives and submit their views and opinions to them as a way of participating in the negotiations. On a related note, previous COPMOPs were only open to invited delegates; but this year's upcoming COPMOP in October will be open to the public through its online platform. The participants were encouraged to register to join the online meetings and pass on the invitation to their colleagues and contacts. The virtual session of the COP15/COPMOP10/COPMOP4 will be held from October 11 to 15, 2021.

ISAAA plans to continue holding these webinars to equip more stakeholders and garner more involvement in the Convention. To learn more about the upcoming webinars, send an email to knowledge.center@isaaa.org or stay updated through the Crop Biotech Update.