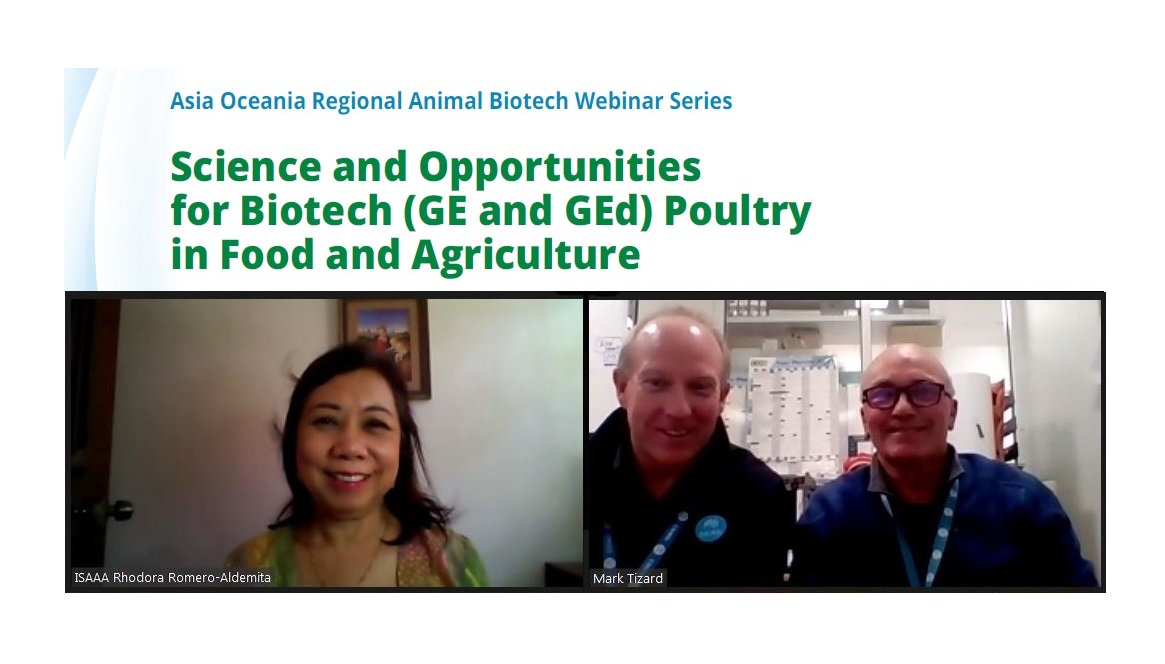 ISAAA launched the first webinar of the series of the Asia Oceania Regional Animal Biotech Webinar with a focus on gene editing in poultry. The webinar featured CRISPR applications to develop chickens with special traits that may eventually improve poultry production for meat and eggs, and generate biologicals for medicine.

The webinar was streamed on May 13, 2021, and featured Dr. Tim Doran, Senior Principal Research Scientist for the Health and Biosecurity Unit of Australia's Commonwealth Scientific and Industrial Research Organisation (CSIRO). Doran gave a presentation about the GEd chickens developed by CSIRO using in vivo transfection of primordial germ cells (PGCs), a direct-injection technique that they specifically developed. The technology involved injecting CRISPR components intravenously into chicken embryos that are 2.5 days old resulting in about 1-10% efficiency of germ-line integration. Using the technique, CSIRO was able to come up with several studies such as developing chickens with improved resilience against Avian influenza (ANP32A), Avian leucosis virus subgroup J, and Merek's Disease Virus. CSIRO also used it to produce allergen-free eggs, by knocking out ovomucoid, the most allergenic white protein, using a well-established poultry genome engineering capability that is safe in cooked egg products. This will be beneficial to consumers with egg allergy which is a food safety issue and has implications for vaccine production that uses eggs.

Lastly, CSIRO used their technique to develop the next generation of vaccine eggs. They used CRISPR to delete a segment of the IFNAR1 gene, a protein-coding gene commonly associated with devastating viral diseases. The CRISPR plasmid was injected into eggs which were later on hatched into chicks that were raised to sexual maturity. After two generations and characterization tests, the development of the GEd chickens was found to be successful. CSIRO found that their technique may provide new opportunities for genome editing in chicken and other avian species that lack PGC culture.

Doran and fellow CSIRO scientist Dr. Mark Tizard gave further insights not just about their work in the laboratories but also how CSIRO complies with Australia's biosafety regulations in developing the GEd chickens. They talked about how the consumers' needs and acceptance, as well as regulations, are both considered during product development, and that CSIRO encourages public participation in the process by conducting public perception studies. They expressed that although the GEd chicken is anticipated to gain public acceptance, it may take two to three more years before it is commercialized.

The Asia Oceania Regional Animal Biotech Webinar Series is made possible by ISAAA BICs Network and the United States Department of Agriculture. Head over to CSIRO's research publications repository to find out more about the GEd chicken that they are developing. To get updates about the webinars, subscribe to the Crop Biotech Update and follow isaaa.org on Facebook, Twitter, and Instagram.