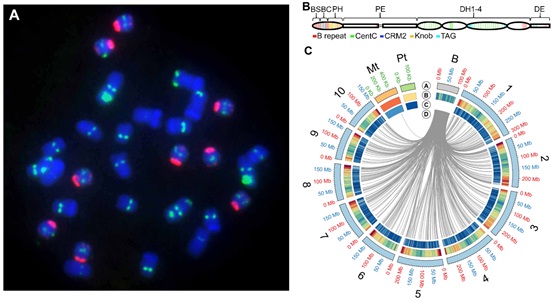 Characterization of maize B chromosome. Image by Dr. James A. Birchler's group

Supernumerary B chromosomes are present in thousands of plant and animal genomes despite being nonessential. They are maintained in populations by mechanisms of "drive" that make them inherited at higher than typical Mendelian rates. However, their key properties such as their origin, evolution, and the molecular mechanism for their accumulation in maize have remained unclear even though such chromosomes have been a potent tool for studying maize genetics.

The researchers discovered the rich availability of deletion derivatives ensured strong scaffolding and vetting of assembly. In addition, 758 protein-coding genes were identified from the 125.9-Mb of chromosome sequence, of which at least 88 are expressed. They also discovered that the current gene content is a result of continuous transfer from the A chromosomal complement over an extended evolutionary period. Annotation results show that transposable elements in the B chromosome are shared with the standard A chromosome set. However, the failure of multiple lines of evidence to reveal a syntenic region in the B chromosome with any A chromosome indicates that this chromosome has been present in the evolutionary lineage for millions of years since any such synteny has disintegrated.

For more details, read the news article in the Chinese Academy of Sciences Newsroom.