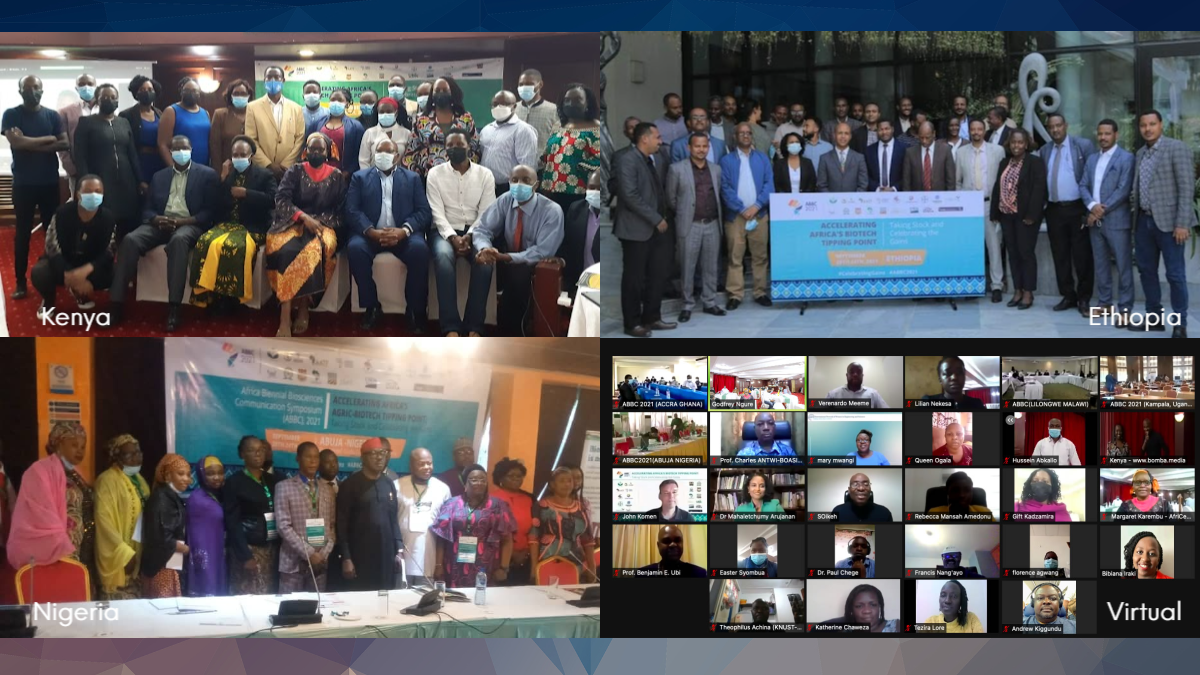 Calls for enhanced scientific collaboration, government/political goodwill and development of public-private partnerships in the biotechnology sector took center stage as biotech stakeholders gathered at this year's Africa Biennial Biosciences Communication (ABBC2021) symposium. Africa's biotechnology sector, the stakeholders opined, is poised to develop faster if all involved parties cooperated in their concerted efforts to address challenges that affect the sector.

In his opening remarks, Prof Aggrey Ambali, who is the Head of Science, Technology and Innovation Hub at the Africa Union Development Agency- of New Partnership for Africa's Development (AUDA-NEPAD), noted that in order to take advantage of biotechnology's growth and development, African countries need to reflect on their successes and consolidate the lessons needed to inspire and propel the continent forward. "This can be achieved by bringing stakeholders together, a role that ABBC has been playing since its initiation in 2015. It is also commendable that ABBC provides an African-based and African-led platform, the first of its kind in the region to focus primarily on the fundamental role that communication plays in building trust and confidence in modern biotechnology and bio-innovations in general," he asserted. This, he noted, will contribute to changing the narrative from one of debates to dialogue and implementation. Prof Ambali further alluded to the numerous developments that modern technologies continue to present, indicating AUDA-NEPAD support and appreciation of researchers' efforts in introducing innovations in Africa agriculture.

Several of the notables who addressed the gathering, which is conducted both physically in small focus groups and virtually internationally, noted that the continent needs biotechnology to address the challenges that it faces. Africa Agriculture Technology Foundation (AATF) Executive Director, Dr. Canisious Kanangire noted that such high-level engagements as the ABBC2021 offer an opportunity to engage, learn and share experiences in biotech and in this way, enhance its applicability in Africa. "The ABBC symposium is a great communication platform that bridges the gaps that often arise when it comes to communicating fact-based information on biotechnology," Dr. Kanangire said. Dr. Margaret Karembu, Director of ISAAA AfriCenter, and Co-convener of the symposium indicated that the rich pool of experts and stakeholders that ABBC2021 brings together will definitely come up with comprehensive resolutions that will accelerate Africa's uptake of biotechnology including new breeding tools such as genome editing.

Other key speakers on Day 1 of ABBC2021 included Dr. Mahaletchumy Arujanan, ISAAA Global Coordinator; Prof Jennifer Thomson of the University of Cape Town; Priscila Quaini Jacobitz, the Government Affairs Manager at Croplife Europe; and Chavonda Jacobs-Young, Administrator of the US Department of Agriculture's chief scientific in-house research agency. During the ABBC2021, participants are expected to share experiences on agriculture, biotechnology, biosafety, and inspire other prospective countries. They are also expected to synthesize the best communication and policy advocacy strategies to accelerate the continent's biotechnology impetus, and to celebrate successes made over the years. The event will culminate in the launch of the African Coalition on Communicating about Genome Editing on September 24, which was a key recommendation during the ABBC2019 held in South Africa. The 4th of the ABBC symposium series first held in 2015, ABBC2021 runs from September 20-24 and brings together stakeholders to take stock of gains that modern biotechnology has made in addressing Africa's challenges. The six countries running concurrent ABBC2021 physical meetings are Ethiopia, Ghana, Kenya, Malawi, Nigeria, and Uganda.