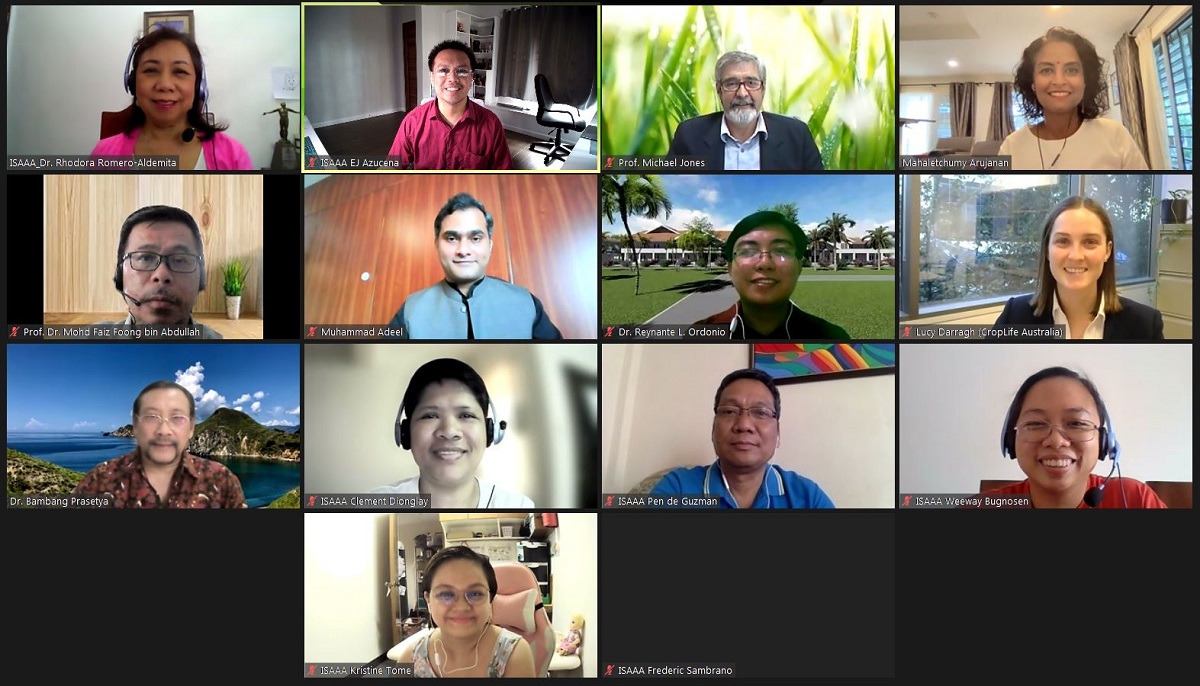 Scientists and policymakers should engage in open discussions to develop harmonized frameworks to complement the advances of gene editing technology. This is one of the key takeaways in the webinar organized by ISAAA, in partnership with Murdoch University and Biotechnology Information Centers held on June 11, 2021 via Zoom.

The webinar titled International Trade in Crops with New Breeding Technologies: The Australian Perspective provided the audience an overview of the different gene editing technologies and the biosafety frameworks to regulate them and their products, and how these affect international policies and food trade.

The panelists included Prof. Michael Jones of Murdoch University who talked about gene editing technologies, their products in the pipeline being developed in Australia, the current regulations and trade that Australia is engaged with, and their prospects. Muhammad Adeel, a Career Diplomat at the Pakistan Ministry of Foreign Affairs and a Ph.D. student at the West Australia State Agricultural Biotechnology Center, focused on science diplomacy, international policy, and biotechnology regulation and cited examples of best practices made by South America in deregulating gene-edited products, while Lucy Darragh of CropLife Australia provided the insights from the perspective of Australia's private crop industry. Three experts from Malaysia, the Philippines, and Indonesia were also invited to provide updates on their respective country's regulations, national frameworks, and responses towards gene editing technology.

During the open discussion, Jones explained that the Australian public may be more open to accepting gene-edited products if it is deregulated and is treated as conventional crops. After all, the technology used to develop gene-edited crops did not involve genes from outside their own. Rather, their own traits were enhanced to improve them. "We've talked to everyone from breeders, scientists to marketers, and they all said they'd love to use (gene editing) technology. If it's deregulated, then they're happy to use it," he said.

Adeel stressed the need for harmonized frameworks to complement the advances of gene editing technology. "It begins in increasing cross-talks between your substate organizations including universities and relevant regulatory officers and understanding what is this mindset of the regulator," he said. "If there are more cross-talk between departments, understanding what their objective and assessments are, at the end of the day you move towards creating a national level of legislation," he added.

The representatives from the three Southeast Asian countries also expressed their thoughts on the importance of national regulations in instilling trust in the public to pave way for gene editing's public acceptance. "It's important to make awareness for the regulator and the people," said Dr. Bambang Prasetya, Chair of the Indonesian Biosafety Committee for Genetically Engineered Products. "Public acceptance is really key to the success of an NBT product," agreed Dr. Reynante Ordonio of the Philippine Rice Research Institute. "We are observing transparency in the regulatory process. We show the public that the documents are submitted to the regulators and the regulators approve them through a process. We want to instill trust in the public and the institution and we want to show them that scientists are developing products for the public. What matters most to us is safety," he concluded.