Eggplant is a staple food in India and other countries in South and Southeast Asia where it is called brinjal, along with over 30 Sanskrit names.1 It also comes in a variety of shapes and colors. Some are striped and round, others white and short, looking like a chicken egg, thus its most famous name.

In the Philippines, eggplant is known as talong and is the number one vegetable in terms of production area. An average of 21,225 hectares is planted with eggplant each year.2 In India, it is grown on nearly 550,000 hectares, making the country the second largest producer after China with a 26% world production share.3 In Bangladesh, it is the third most important  vegetable in terms of production and grown on about 50,000 hectares across the country.4 Hence, eggplant is an important source of income to many Asian farmers.

The benefits of eggplant do not stop with the farmers. It is also beneficial for human health because it is high in fiber and water, rich in anti-oxidants, and a good source of vitamins and minerals (Table 1). Hence, this vegetable can help prevent cancer, diabetes, and gastrointestinal diseases.

Eggplant farmers suffer significant yield losses at 51-73% annually due to the Eggplant Fruit and Shoot Borer (FSB).6 Female moths deposit eggs mostly on eggplant leaves. When the eggs hatch and turn into larvae (Figure 2), they feed on leaf tissues and tunnel inside shoots and fruits (Figure 3).

To address this problem, many eggplant farmers in major eggplant producing areas in the Philippines and Bangladesh spray chemical insecticides every other day, or up to 80 times per growing season.7,9 The practice is unacceptable and unhealthy to consumers, farmers, and the environment. It is also a common practice in the Philippines to dip unharvested eggplant fruits in a mix of chemicals to ensure marketability of fruits.7  In India, farmers spray insecticides 20-40 times per crop cycle or else they will have no harvest.8 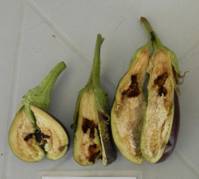 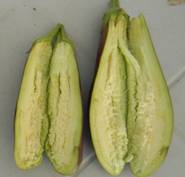 Bt stands for Bacillus thuringiensis, a common soil bacterium that contains a gene which produces a protein harmful to FSB. Scientists have incorporated this gene to eggplant to confer insect resistance.

Bt eggplant (Figure 4) expresses Bt gene, enabling it to produce the same protein that makes it resistant to FSB. When Bt protein is ingested by FSB larva, it is made soluble by the presence of enzyme and alkaline condition (pH9.5) of the gut. It then binds into another protein (receptor) present in the midgut resulting to an active toxin. The Bt toxin then punctures the gut leaving the insect unable to eat. The insect dies within a few days.7 The Bt protein only affects FSB and does not affect humans, farm animals, and other non-target organisms because these organisms do not have the required gut conditions (pH and required receptor) to activate the toxin (Figure 5).

Other Bt crops such as Bt corn and Bt cotton have showed improved pest management and reduced insecticide use. This also led to greater net return for growers and improved conditions for non-target organisms.

Bangladesh
After 7 years of field and greenhouse trials in various locations, Bangladesh became the first country in the world to approve the commercial planting of Bt brinjal, which started in 2014.10

Four varieties of Bt brinjal were approved for release on October 30, 2013 in time for the 2013-2014 growing season. The Ministries of Environment and Forests (MoEF) and Agriculture (MoA), and the Bangladesh Agricultural Research Institute (BARI) approved the following: Bt Uttara, Bt Kajla, Bt Nayantara, and Bt ISD006. On January 22, 2014, Agriculture Minister Matia Chowdhury officially distributed Bt brinjal seedlings to 20 farmers from Jamalpur, Gazipur, Pabna, and Rangpur districts.11 Bt brinjal was initially planted on 2 hectares during the spring season of 2014. Based on experimental data, Bt brinjal can increase yield by at least 30 % and reduce the number and cost of insecticide applications by 71-90%.4

India
In India, Bt brinjal was developed by the Maharashtra Hybrid Seeds Company (Mahyco).3 Despite the conduct of field trials from 2002-2006, a moratorium was issued in October 2009, and a government ban was implemented in February 2010.12 Results of the multilocation research trials showed that Bt brinjal can reduce insecticide use by 77%. Marketable fruits may increase to 116% over conventional hybrids and 166% over popular open-pollinated varieties. Researchers have estimated that Bt brinjal will deliver farmers a net economic benefit of Rs.16, 299 (US$330) to Rs.19,744 (US$397) per acre with national benefits to India exceeding $400 million per year.3

Philippines
Studies were conducted on the potential costs and benefits of Bt eggplant commercialization in the Philippines based on the results of multi-location field trials of the crop. The average potential net benefit of planting Bt crop is 272,000 (US$6,243)/ha higher than conventional varieties in the province of Pangasinan and PHP120,000 (US$2,753) in Camarines Sur. This significant increase in profit is due to increased marketable yield and reduced pesticide use. It was projected that there will be 48% reduction in pesticide application per hectare. This can be translated to 19.5% lower environmental footprint compared to non-adopters.

Aside from the increase in income, significant health and environmental benefits will accrue from the significant reduction of pesticide use. Assuming a 50% adoption rate, the benefits of Bt eggplant to human health is valued at PHP2.5 million (US$57,353) per year while the collective benefits to farm animals, beneficial insects and bird is estimated to be PHP6.8million (US$155,841) per year.2

Critics of the technology filed a case in 2012 to stop the field trials of Bt eggplant in the Philippines, which was actually completed prior to the filing of the case. The following year, the Philippine Court of Appeals (CA) issued a ruling in favor of the critics.10 The respondents filed a petition to the Supreme Court to review the CA decision. In 2015, the Supreme Court declared that the testing of Bt eggplant should be stopped but reversed this decision in 2016 and granted Motions of Reconsideration submitted by the Bt eggplant developers and co-petitioners.13

Next Pocket K: Adoption and Uptake Pathways of Biotech Crops by Small-scale Farmers in China, India, and the Philippines