Brinjal or baingan, known as eggplant and aubergine in North America and Europe respectively, is a very important common man’s vegetable in India. It is often described as a poor man’s vegetable because it is popular amongst small-scale farmers and low income consumers. A poor man’s crop it might be, but brinjal is also called by some as the ‘King of Vegetables’. It is featured in the dishes of virtually every household in India, regardless of food preferences, income levels and social status. Low in calories and high in nutrition, the vegetable has very high water content and is a very good source of fiber, calcium, phosphorus, folate, and vitamins B and C. It is also used in ayurvedic medicine for curing diabetes, hypertension and obesity. In addition, dried brinjal shoots are used as fuel in rural areas. Brinjal has embedded itself deeply into the Indian culture. Numerous folk songs in Indian languages center on the humble vegetable.

Brinjal is grown on nearly 550,000 hectares in India, making the country the second largest producer after China with a 26% world production share. It is an important cash crop for more than 1.4 million small, marginal and resource-poor farmers. Brinjal, being a hardy crop that yields well even under drought conditions, is grown in almost all parts of the country. Major brinjal producing states include: West Bengal (30% production share), Orissa (20%), and Gujarat and Bihar (around 10% each). In 2005-2006, the national average productivity of brinjal was recorded around 15.6 tons per hectare. 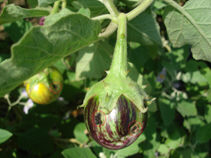 In spite of its popularity among small and resource-poor farmers, brinjal cultivation is often input intensive, especially for insecticide applications. Brinjal is prone to attack from insect pests and diseases, the most serious and destructive of which is the fruit and shoot borer (FSB) Leucinodes orbonalis. FSB feeds predominantly on brinjal and is prevalent in all brinjal producing states. It poses a serious problem because of its high reproductive potential. FSB larvae bore into tender shoots and fruits, retarding plant growth, making the fruits unsuitable for the market and unfit for human consumption. Fruit damage as high as 95% and losses of up to 70% in commercial plantings have been reported.

Farmers resort to frequent insecticide applications and biological control measures to counter the threat of FSB. However, since FSB larvae are concealed within shoots and fruits, the pest normally escapes insecticide sprays. Therefore farmers tend to over-spray insecticides, because they rely mainly on the subjective assessments of the visual presence of the pest. In addition to the financial cost associated with indiscriminate insecticide applications and its negative effects on the environment, high pesticide residues in vegetables and fruits pose serious risk to consumers’ health and safety.

Although, several attempts have been made to develop resistant cultivars through traditional plant breeding, these have met with limited or almost no success. There are no existing brinjal varieties with adequate resistance to FSB in India. Accordingly, scientists have used biotechnology to develop a brinjal variety that can resist FSB attack. 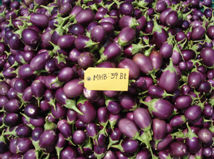 FSB-resistant brinjal or Bt brinjal was developed using a transformation process similar to the one used in the development of Bt cotton, a biotech crop that was planted on 7.6 million hectares in India in 2008. Bt brinjal incorporates the cry1Ac gene expressing insecticidal protein to confer resistance against FSB. The cry1Ac gene is sourced from the soil bacterium Bacillus thuringiensis (Bt). When ingested by the FSB larvae, the Bt protein is activated in the insect’s alkaline gut and binds to the gut wall, which breaks down, allowing the Bt spores to invade the insect’s body cavity. The FSB larvae die a few days later.

Bt brinjal is the first food crop under evaluation for commercial release in India. Since its development in 2000, the crop has undergone rigorous scientific evaluation to assess its food safety, environmental safety, human and animal health safety and biodiversity. Figure 1 summarizes the protocol followed for the regulatory approval of Bt brinjal. 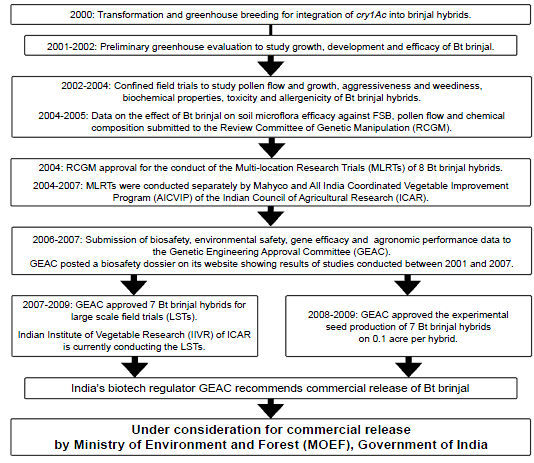 Rigorous scientific tests, including toxicity and allergenicity evaluation as well as nutritional studies on rabbits, rats, carps, goats, broiler chickens and dairy cows, have confirmed that Bt brinjal is as safe as its non-Bt counterparts. The safety of Bt brinjal was further validated by the results of the studies on pollen escape, effects on soil microflora and non-target organisms, agronomy, invasiveness and Bt protein degradation. Results of the studies demonstrated that Bt brinjal does not affect beneficial insects such as aphids, leafhoppers, spiders and lady beetles. 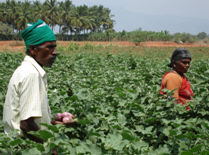 Bt brinjal was found to be effective against FSB, with 98% insect mortality in Bt brinjal shoots and 100% in fruits compared to less than 30% mortality in non-Bt counterparts. The Multilocation Research Trials (MLRTs) confirmed that Bt brinjal required, on average, 77% less insecticides than non-Bt counterparts for control of FSB, and 42% less for the control of all insect pests of brinjal. The benefits of Bt brinjal, translate to an average increase of 116% in marketable fruits over conventional hybrids, and 166% increase over popular open-pollinated varieties (OPVs). Furthermore, the significant decrease in insecticide usage reduced the farmers’ exposure to insecticides and results in a substantial decline in pesticide residues in brinjal fruits. Scientists have estimated that Bt brinjal will deliver farmers a net economic benefit ranging from Rs.16, 299 (US$330) to Rs.19,744 (US$397) per acre with national benefits to India exceeding $400 million per year.

Bt brinjal has enormous potential to benefit both farmers and consumers. Results of studies submitted to regulatory authorities in India confirm that Bt brinjal offers the opportunity to provide effective control against fruit and shoot borer, and decrease insecticide input by as much as 80%. Bt brinjal also yields significantly more marketable fruit than conventional hybrids and open-pollinated varieties.

The remarkable success of Bt cotton in India, which now occupies 80% of the 9.4 million hectares planted to cotton in the country, is a clear demonstration that biotechnology can be harnessed to contribute to alleviation of poverty and hunger. The development of Bt brinjal, the first biotech vegetable crop, is an appropriate and timely step because it will further demonstrate the significant benefits that biotechnology offers farmers, consumers and India as a nation.

In this context, the Genetic Engineering Approval Committee (GEAC), in its 97th meeting held on 14th Oct 2009 has recommended the commercial release of Bt Brinjal Event EE-1 developed indigenously by Mahyco in collaboration with the University of Agricultural Sciences (UAS), Dharwad and the Tamil Nadu Agricultural University (TNAU), Coimbatore. This is a penultimate step to commercialize Bt brinjal hybrids and varieties in the country (MOEF, 2009).

The insect-resistant Bt brinjal hybrids and varieties were developed through close and harmonious cooperation between public and private research institutions. The joint contribution of the two sectors is of critical importance, given that national food security is a strategic issue. The adoption and acceptance of Bt brinjal by farmers and consumers in India will be a very important event from which the country and the world can benefit enormously.