Pocket K No. 49: Adoption and Uptake Pathways of Biotech Crops by Small-scale Farmers in China, India, and the Philippines

Biotech or genetically modified (GM) crops have been offered as a modern crop development alternative to address the onslaught of pests and diseases, the vagaries of weather and other challenges to growing crops. Contrary to the notion that only farmers from developed countries are reaping the gains of modern biotechnology about 85% of these farmers are small landholders in the developing countries of China, India, and the Philippines.1

The Adoption and Uptake Pathways of Biotech Crops by Small-Scale, Resource-Poor Asian Farmers: Comparative Studies in China, India, and the Philippines project was spearheaded by the International Service for the Acquisition of Agri-biotech Applications (ISAAA) to give a human dimension to the statistics on farmer adoption and uptake pathways of biotech crops and the changes these have brought about in resource-poor farmers’ lives. “Adoption” refers to how farmers acquire and eventually apply the knowledge and practices pertaining to the planting of a biotech crop and “uptake pathway” involves the process of capturing how a biotech crop is introduced, adopted, spread, and shared by farmers with others.2

Collaborators from the Center for Chinese Agricultural Policy, Chinese Academy of Sciences; the Indian Society for Cotton Improvement; and the College of Development Communication at the University of the Philippines Los Baños surveyed farmers from Hebei, Shandong, Anhui, and Henan provinces in China located in the Huang-Huai-Hai cotton production zone; cotton-growing states of Andhra Pradesh, Maharashtra and Punjab in India; and maize-growing provinces of Pampanga, Iloilo and South Cotabato in the Philippines, respectively. 2,3,4,5,6

Who are the farmers using GM crops?

Traditionally, small-scale farming in developing countries has been stereotyped as backbreaking, not commensurate with the efforts exerted, unprofitable, and particularly unappealing to the youth. But farmers planting biotech crops paint a different picture.

While Bt cotton production is still a male-dominated activity, there is growing involvement of women in GM crop commercialization in China. Based on focus group discussions, more and more women are attracted to the benefits of growing Bt cotton as there is less labor involved than would otherwise be needed for pesticide applications.

Filipino males dominate the planting process but wives control the input costs and spending and thus are major decision makers in the choice of crop to plant and farming methods to adopt. In Indian households, planting of Bt cotton has become a family affair with the household head taking the more strenuous activities and mothers and children helping to pick and clean cotton bolls.

In India, it is a significant sign that Bt cotton is attracting the young with over 50% in the 21-40 age bracket among those surveyed in the cotton-growing areas of Punjab, Andhra Pradesh, and Maharasthra.

Interestingly, in the Philippines, even college graduates are venturing into GM maize production, thus finding it a viable income-generating alternative. Farmers in China and the Philippines report two to three times higher income from planting GM crops while Indian farmers obtain twice the income over traditional varieties.

Reasons for Adoption of GM Crops

Higher economic and yield benefits, freedom or reduced infestations from cotton bollworm or corn borer, and dramatic reduction in pesticide use and frequency of spraying are the principal motivators for adoption of GM cotton in the three countries. Presence of private traders that sell seeds and provide capital loans as well as trust and strong ties among farmers that contributed to the information flow on biotech crops also facilitated adoption.

Yet, as with any technology, there are also factors that limit or slow down adoption and uptake of biotech crops. These include lack of capital and high cost of farm inputs especially in India and the Philippines. Influence of elders and church groups skeptical of biotech crops in these two countries were also noted. In China, local seed companies could not meet the demand for biotech seeds in the initial years of commercialization. Limited access to information about the new technology and inadequate government support also contributed to delayed adoption.

Interestingly, it is not the government agricultural extension services that are crucial in farmer adoption of new technology. Rather, farmer leaders or village cadres have become local champions of GM crops as they take frontline action in trying out the technology after seeing a demonstration field trial, sharing their knowledge and demonstrating commitment to spread the benefits with fellow farmers within and beyond their community.

Field research indicates that early adopting farmers in India and the Philippines take the risk of a new technology by trying out a biotech crop which they initially heard about from a demonstration field trial set up by seed companies or from progressive village leaders. Other farmers in the community take a ‘wait and see’ attitude. They take time to see how things progress, but become easily motivated to try the new crop after seeing convincing results of higher yields and bountiful harvests from the early adopters. 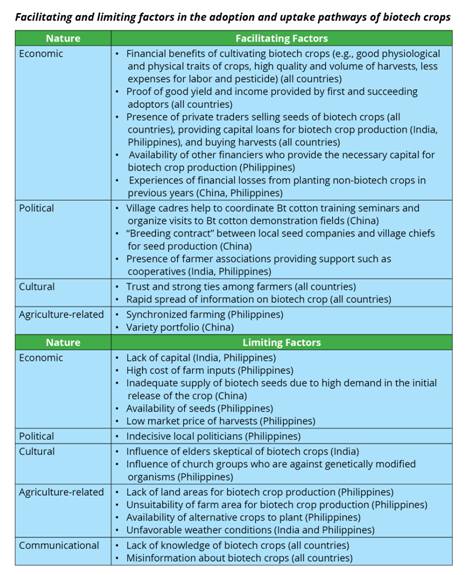 Early adopters are usually committed to sharing biotech crop know-how with their relatives and peers. Among the farmers and other actors in the farming system, knowledge-sharing about biotech crops is highly interpersonal and face-to-face. This is due to the prevailing strong peer system among farmers and the belief that they owe it to themselves and their fellow farmers to share what would benefit everyone in the community.

In China, the role of village cadres is quite important in that they coordinate with technicians to arrange training and convince farmers to participate in farm-related activities. Hence, the factors that facilitate early adoption are three-fold:

The champions of GM crops are the farmers. It does not take much to realize that it is not scientists, institutional advocates, extension officers or other government agents who play key roles in making farmers adopt a new technology in the first place. At the end of the day, it is the individual farmer who makes the crucial decision of whether to plant a crop or not, decide on the variety to plant, and adopt new techniques and cultural practices. He has tilled the land for so long and has a wealth of experience to know what is best for him and his community. Farmers are risk adverse and may need more progressive village leaders to outline benefits of new technologies. Yet, once they see the benefits, there appears to be no turning back.  Nevertheless, problems still exist which require the participation and cooperation of both the public and private sectors.

The amazing fact is that farmer adoption of Bt cotton is now more than 95% of total cotton production in China and India while 80% of Filipino yellow corn farmers are planting biotech maize.