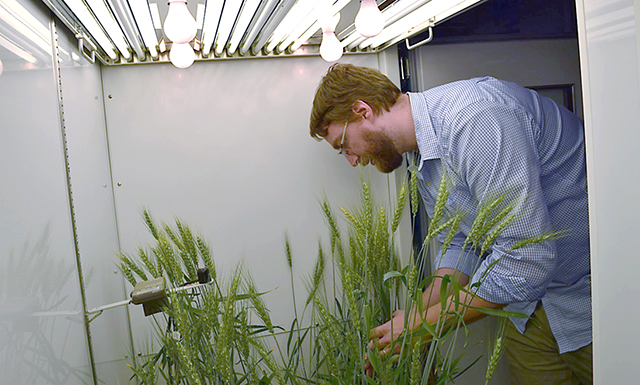 Scientists from the U.S. Department of Agriculture's Agricultural Research Service (ARS) are preparing wheat for climate challenges ahead.

The scientists are subjecting more than a dozen wheat varieties to two major stressors. The first comes from exposure to carbon dioxide (CO2) levels of up to 1,000 parts per million—an atmospheric concentration of the greenhouse gas projected for the turn of the century absent mitigation measures. The other stressor is infection by the insidious fungus Fusarium graminearum. This fungus causes head blight, a costly disease of wheat, barley, and oat crops worldwide that can damage the grain and contaminate it with mycotoxins, rendering the grain unsafe for food or feed use.

The team is also studying how the fungus itself behaves in wheat plants exposed to high CO2 levels and observed that the severity of blight and production of mycotoxins like deoxynivalenol depends on the fungal strain and wheat variety attacked. They also found that besides protein and minerals, Alsen plants suffered a drop in oleic and linoleic fatty acids, which normally contribute to resistance to blight and other fungal diseases.

For more details, read the article in ARS News & Events.