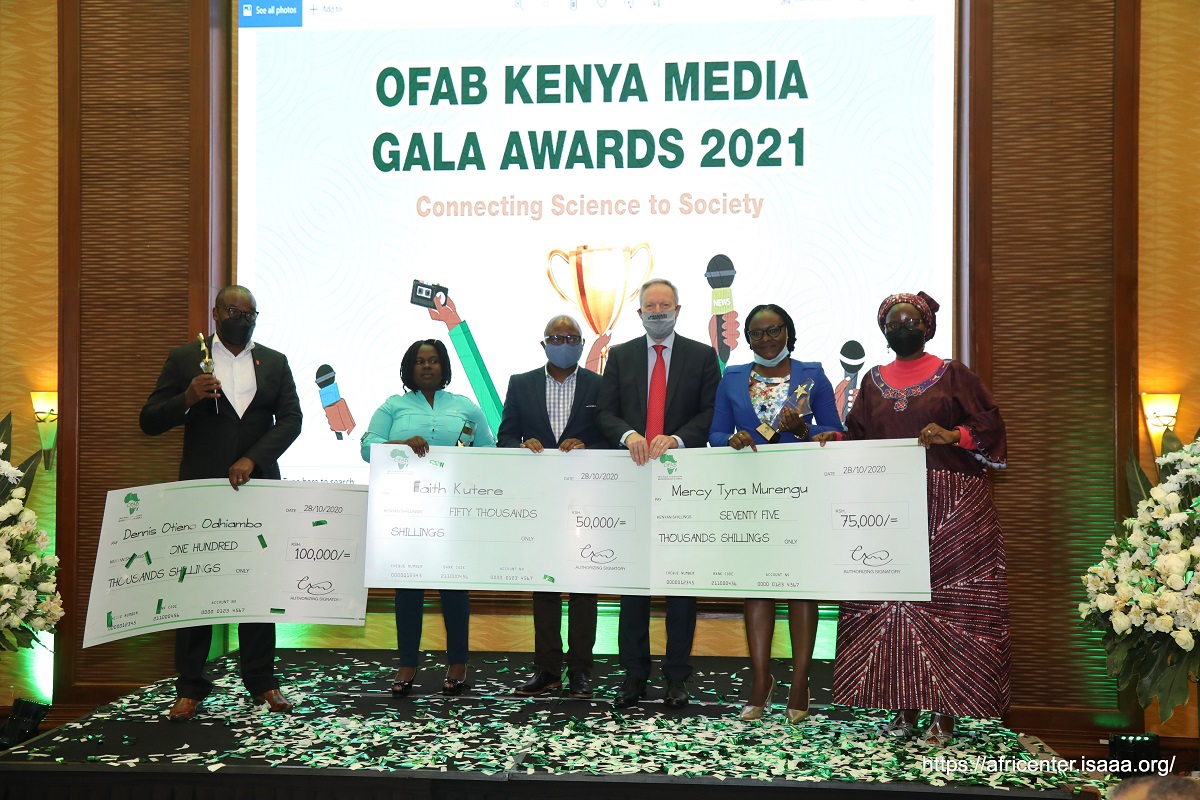 The Kenya Chapter of Open Forum on Agricultural Biotechnology in Africa (OFAB-Kenya) has celebrated exemplary science journalism and feted three top journalists for their contribution in promoting agricultural biotechnology. The celebrations were held during a media awards gala held in Nairobi on October 28, 2021.

Speaking during the event, Australian High Commissioner to Kenya His Excellency Luke Joseph Williams, who was the Chief Guest, applauded the media terming it an important stakeholder in encouraging constructive dialogue and supporting coherent, evidence-based decision making. "We therefore laud OFAB-Kenya and partners for going out of their way to encourage factual reporting on biotechnologies key to agricultural transformation," he remarked.

His Excellency Williams identified biotechnology as one of the most important tools driving the Fourth Industrial Revolution especially as Africa strives to meet the Sustainable Development Goals by 2030 and Africa's Agenda 2063. "Future agri-food systems will expectedly be different from those of today and will largely be driven by science, technology and innovations (STIs)," he said.

Commending the media's inputs in advancing the adoption of crop biotechnology, OFAB Africa Project Manager Vitumbiko Chinoko called for the insertion of more efforts in promotion of modern agricultural technologies. Mr. Chinoko observed there has been significant progress in improving the public's perception about biotech. "But we still need to do more in promoting agriculture biotechnology because it speaks to the essence of African farmers. Without sufficient food, virtually all other sectors will stagnate," he said.

In her speech, ISAAA AfriCenter Director Dr. Margaret Karembu, who is also the OFAB-Kenya Chairperson, outlined the media's contribution towards crop biotech progress in Africa saying journalists' efforts cannot be gainsaid. "Kenya's media have made an invaluable contribution to the growth of agricultural biotechnology in the country by making the subject a public agenda item," she observed.

During the event, Citizen TV's agriculture reporter Denis Otieno was crowned the overall winner while Africa Business News Network's science journalist Mercy Tyra Murengu emerged the first runner-up after winning the Print and Online Category. Radio Maisha's reporter Faith Kutere was the second runner-up after topping the Radio Category. The trio received plaques, certificate of recognition and cash prizes in acknowledgment of their honors. The winners will now represent Kenya at the OFAB-Africa Media Awards to be held in Mozambique at the end of November 2021.

For more on this and other biotech developments in Africa, contact Dr. Margaret Karembu at mkarembu@isaaa.org.