Protein Found to Switch on Part of Plant's Drought Defense 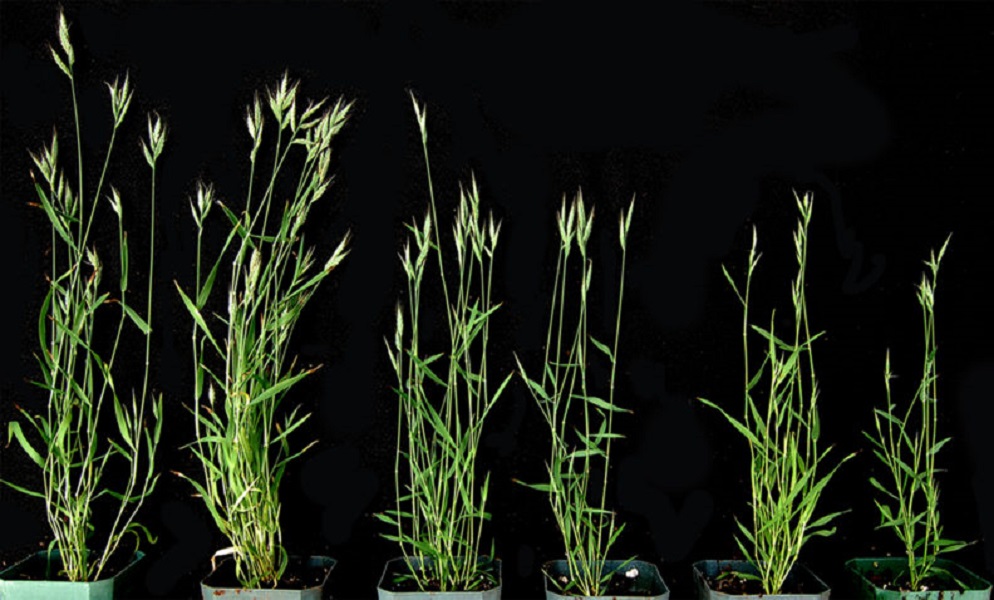 WSU scientists experimented with model grasses to reveal the function of an important plant protein called MAP20. Plants with lower levels of MAP20, at right, were smaller, with lower yields and greater susceptibility to drought (WSU photo).

MAP20 protein is a key component of plant cell walls. Its physiological function remains to be a mystery, thus a team of scientists investigated its effects on a plant's response to drought.

Scientists from the Washington State University, Princeton University, and Université Côte d'Azur collaborated to study the MAP20 and test its functions through several experimental designs using genetics, cellular structure analysis, cell biology, and biochemistry. They determined that the protein is mostly found in the developing xylem, and it centers on pits that are responsible for inter-cellular fluid movement. Pit structure is known to play a role in a plant's response to drought: it prevents embolisms in vascular cells during drought.

During the experiments, the scientists found that plants that lacked MAP20 had lower survival chances – it affected the development of the vasculature system, caused lower yield, and increased the plant's susceptibility to drought. They concluded that MAP 20 acted like a switch that changed the size of pit and pit membranes, thereby helping make smaller pits with thicker membranes during drought thus preventing embolism. The scientists are optimistic that their findings can lead to future research to breed better-yielding crops with optimal vascular structure despite drier climates.

Read the press release from Washington State University and the full paper in New Phytologist for more details.