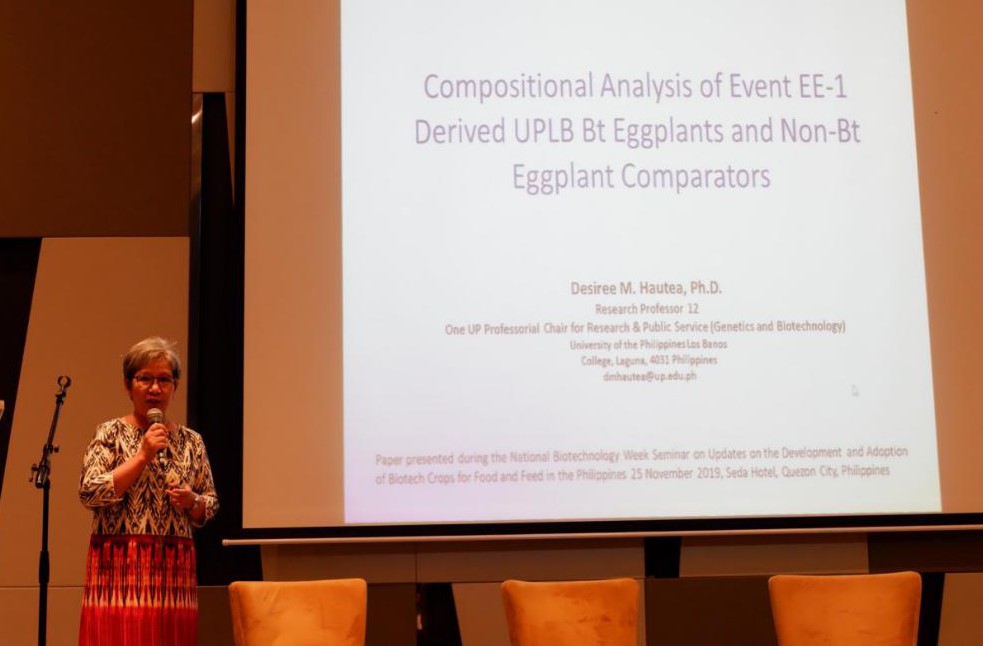 Bt Eggplant Project Leader, Dr. Desiree Huatea from the UPLB-Institute of Plant Breeding discusses the crop’s history of food safety during the forum.

The Biotechnology Coalition of the Philippines (BCP), together with the International Rice Research Institute (IRRI) and the Southeast Asian Regional Center for Graduate Study and Research in Agriculture-Biotechnology Information Center (SEARCA BIC) organized a forum on the development and adoption of biotech crops for food and feed in the Philippines. The forum aimed to provide consumers with updated science-based information on the benefits and the long history of safe use of biotech products.

During the forum, around 50 participants coming from different food manufacturing companies, technology developers, and members of the academe had the opportunity to interact with the country's leading technology developers to discuss the government's regulatory process. They also discussed genetically modified (GM) crops that are close to commercialization such as beta-carotene-enriched Golden Rice and the Bacillus thuringensis eggplant (Bt talong) with built-in resistance to the fruit and shoot borer.

Dr. Rey Ordonio, Healthier Rice project leader at the Philippine Rice Research Institute, shared that Golden Rice field trials have been completed in Nueva Ecija and Isabela. Application for commercial propagation will be filed after the certificate of satisfactory completion of field trial has been issued by the Bureau of Plant Industry. University of the Philippines School of Economics Professor Dr. Ramon L. Clarete discussed the economic value of GM corn (Bt corn) for the Philippines. In 2003, the Philippine government approved the commercial release of Bt corn for food and feed, the first in Asia.

According to Dr. Saturnina Halos, BCP President, "as scientists, it is our responsibility to ensure that biotech products are safe and that our citizens, most especially our policymakers, are equipped with scientific knowledge so that they can make informed decisions based on sound science."

The forum was held on November 25, 2019 at Seda Hotel, Quezon City as part of the 15th National Biotechnology Week (NBW).

For more updates about biotech development in the Philippines, visit the SEARCA BIC website.