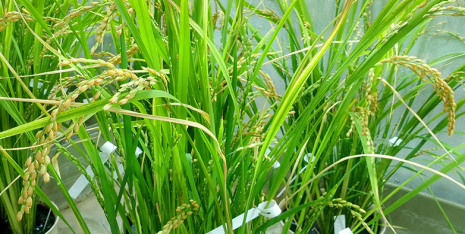 Plant height is one of the most important characteristics of rice because it affects yield potential and lodging resistance. CRISPR-Cas9 was used to edit OsGA20ox2 in rice, leading to generating semi-dwarf mutant lines. The results are published in 3Biotech journal.

The team generated 24 lines with a mutation rate of 73.5 percent in the first generation. Mutations led to a change in the amino acid sequence of mutant plants and lowered levels of gibberellins (GA) and plant height, flag leaf length, and increased yield per plant, while other agronomic traits remained the same. When the mutants were treated with gibberellins, the plant height was restored to normal. OsGA20ox2 gene expression was suppressed in mutant plants, while the expression level was not affected for other genes involved in the production of gibberellins and signaling. The mutant lines exhibited reduced cell length and width, abnormal cell elongation, while increased cell numbers in the second internode sections at mature stage. Total 30 protein spots were exercised, and 24 proteins were identified, and results showed that OsGA20ox2 editing altered protein expression.

The findings provide insights into the role of OsGA20ox2 in plant height and exhibited that CRISPR-Cas9 is a powerful tool in understanding gene functions.