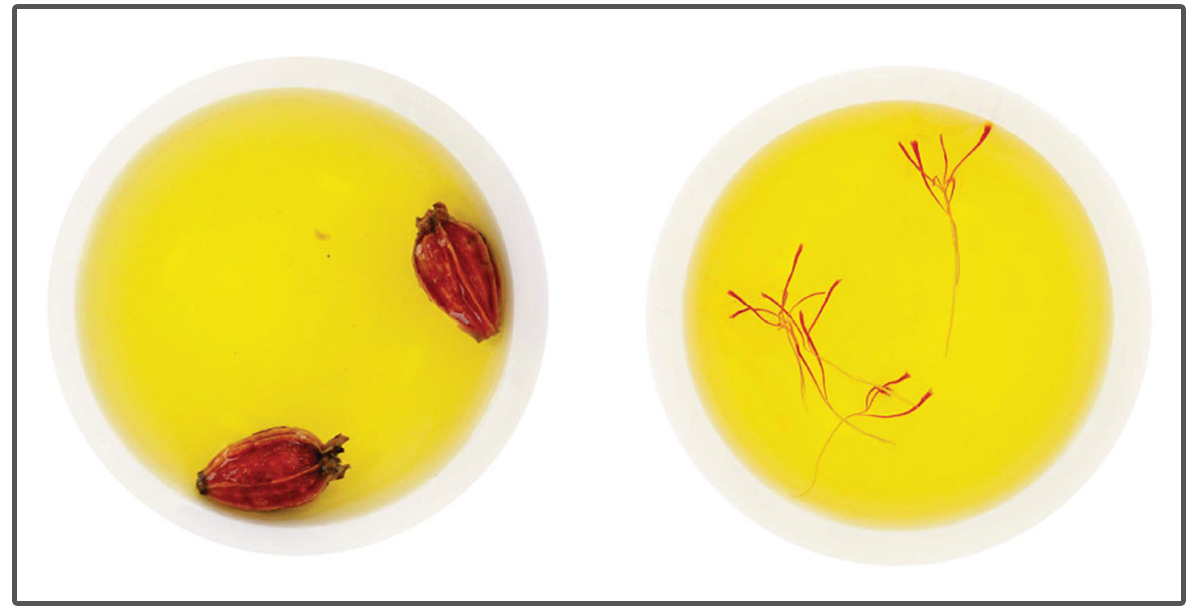 The research team from King Abdullah University of Science and Technology has devised a method to produce saffron's active ingredient from the fruit of an ornamental plant popular in China, Gardenia jasminoides, shown here on the left. On the right is saffron, the world's most expensive spice. Photo Source: KAUST

Saffron, the most expensive spice in the world is obtained from the stigma of Crocus sativa flowers. To produce a kilogram of saffron, it takes 150,000–200,000 flowers. Researchers at the King Abdullah University of Science and Technology (KAUST) have found a way to use a common garden plant to produce crocins, saffron's active ingredient, a compound with important applications in the therapeutic and food industry.

The golden yellow to the reddish-brown color of saffron comes from crocins, water-soluble pigments derived from carotenoids by a process catalyzed by enzymes known as carotenoid cleavage dioxygenases (CCDs). Crocins have high therapeutic potential, protecting neural cells from degradation. They also have antidepressant, sedative, and antioxidant properties. Crocins are also important in the food industry as natural food colorants. Harvesting and processing hand-picked stigmas of saffron are very labor intensive. Moreover, saffron is only grown in limited areas of the Mediterranean and Asia, and new biotechnological approaches to produce these compounds in large amounts are in great demand.

Researchers at KAUST have identified a highly efficient CCD enzyme in the fruits of Gardenia jasminoides, an ornamental plant used in traditional Chinese medicine. G. jasminoides produces the crocin precursor crocetin dialdehyde. The researchers have now established a system for investigating CCD enzymatic activity in plants and developed a multigene engineering approach for sustainable biotechnological production of crocins in plant tissues. Xiongie Zheng, lead author of the study said their biotechnological approach can also be used on crops, such as rice, to develop crocin-rich functional food.

Team leader Salim Al-Babili says their study paves the way for efficient biotechnological production of crocins and other high-value compounds derived from carotenoids (apocarotenoids) as pharmaceuticals in green tissues as well as other starch-rich plant organs.