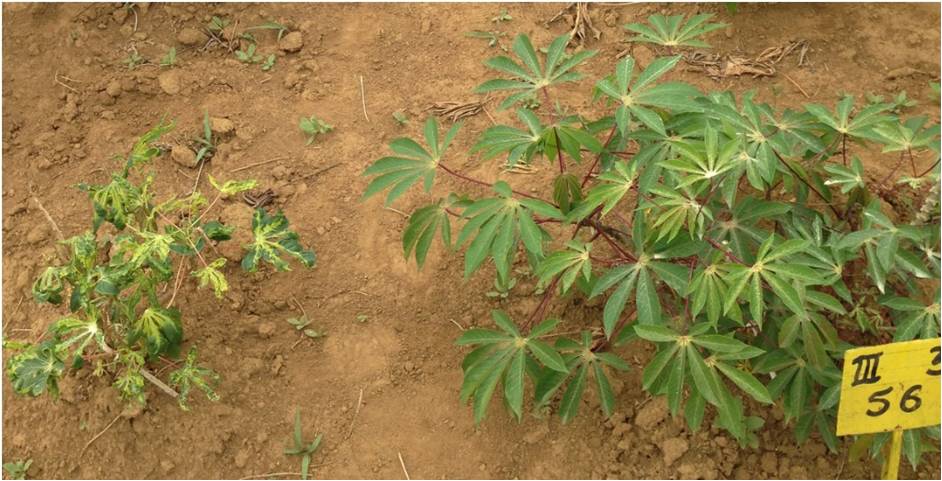 Cassava cultivar TME3 growing in an experimental field in Kenya. On the right is a wild type plant with CMD2 resistance while the CMD-infected plant on the left was regenerated from tissue culture and has lost the CMD2 resistance. Photo Source: Wilhelm Gruissem/ETH Zurich

A research team led by Prof. Wilhelm Gruissem at ETH Zurich, together with collaborators in the U.S. and Uganda, has now identified the gene encoding DNA polymerase δ (POLD1) as the cause of cassava mosaic disease (CMD2) resistance. The POLD1 enzyme is required for the multiplication of geminiviruses that cause CMD in cassava.

Cassava is a vital staple root crop, with almost a billion people worldwide depending on it for food and raw materials. In Africa, cassava is a major source of livelihood for smallholder farmers and important for food security because it can grow without fertilizer in dry conditions. However, cassava farming is constrained by weeds, pests, and viral diseases. Cassava mosaic disease (CMD) caused by cassava mosaic geminiviruses has impacted cassava production in Africa and India, and more recently in Southeast Asia, causing significant yield losses.

“We discovered that the POLD1 gene has mutations which could explain CMD2 resistance. These mutations change amino acids that most likely reduce the proofreading accuracy of the enzyme, which is necessary for the correct replication of DNA,” explains Dr. Gruissem. The ETH team performed whole genome sequencing and genetic variant analysis with many CMD resistant and susceptible cassava cultivars to identify the genetic basis of rare diseases in humans. It also successfully revealed the mutations in cassava POLD1.

For more details, download and read the open-access paper in Nature Communications.