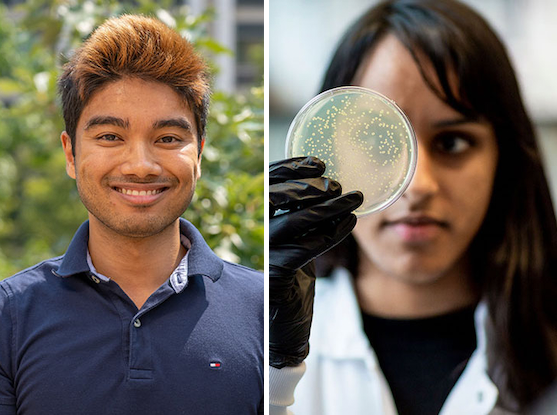 Researchers at MIT's McGovern Institute and the Broad Institute of MIT and Harvard have exposed a class of programmable DNA editing systems called OMEGAs (Obligate Mobile Element Guided Activity), which may play a role in shuffling small pieces of DNA throughout bacterial genomes. The details of their discovery are published in Science.

Programmable enzymes, particularly those that use a RNA guide, can easily be adapted for various purposes. For instance, CRISPR enzymes use a RNA guide to target viral invaders; but biologists can design Cas9 to any target by generating their own RNA guide. This led the researchers to investigate if other natural systems apply a similar mechanism. They initially got a hint that OMEGA proteins might be directed by RNA from proteins known as IscBs. These proteins are not involved in CRISPR immunity and were not linked with RNA, but they appear as small, DNA-cutting enzymes. They found that each IscB had a small RNA (ωRNAs) encoded close to it which directs the IscB enzymes to cut specific DNA sequences. They also discovered other groups of small proteins (IsrBs and TnpBs) that use ωRNAs to direct the cleavage of DNA.

IscB, IsrB, and TnpB are located in transposons, also known as jumping genes. Every time the transposons move, they make a new guide RNA, allowing the enzyme they encode to cut somewhere else. It is not yet defined how bacteria can take advantage of the genomic shuffling, but the researchers think that if hosts can "co-opt" these systems and repurpose them, hosts may gain new abilities, as with CRISPR systems which confer adaptive immunity. The researchers also observed that IscBs and TnpBs could be predecessors of Cas9 and Cas12 CRISPR systems.