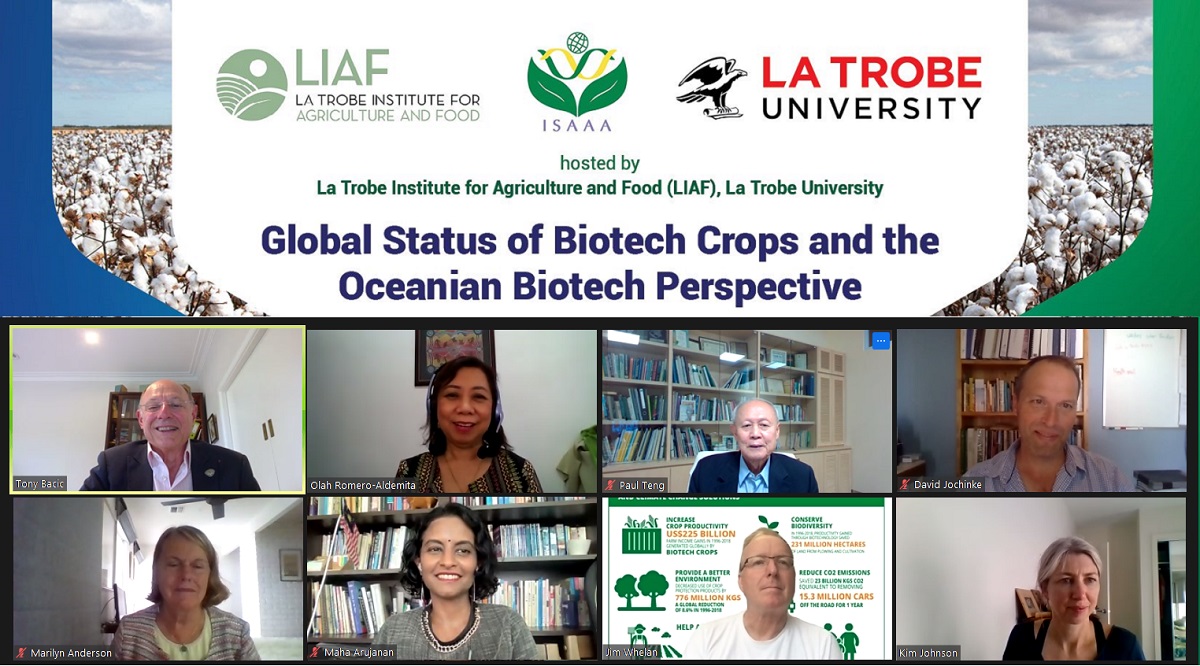 ISAAA and La Trobe Institute for Agriculture and Food (LIAF) successfully launched the ISAAA report on the Global Status of Commercialized Biotech/GM Crops in 2019 on March 11, 2021, in the Asia Pacific and Oceania Region through a webinar hosted by the La Trobe University in Melbourne, Australia.

ISAAA Chair Dr. Paul Teng gave an overview of the global area of biotech crops from 1996 to 2019 along with the global adoption rates of the principal crops. The farmer's perspective on biotech crops was then presented by David Jochinke of Australia's National Farmers Federation. He shared that when he says that he uses biotech crops, the people he talks to directly refer to the negative perception of biotech straight away.

"The aspects of both breeding using markers and trying to make sure we are eliminating some bad traits while improving some good traits in our products always get lost in that conversation...And so how I use my language and what I use it for is really important," Jochinke said. He also related that as a farmer, he would prefer to touch and feel the products of biotechnology. This means being able to learn about the crop, be able to plant it, and make huge farming decisions out of his new knowledge rather than just seeing it published as a scientific paper.

LIAF's Research Director Prof. Jim Whelan tackled the Australian biotech research perspective, also citing environmental and economic benefits and how the technology can help alleviate global food insecurity. "How many billion meals have we consumed with GM products and no adverse cases reported?" he asked the audience. "GM is very safe. It's actually incredibly safe compared to lots of other things out there," he stressed.

The webinar was moderated by LIAF Director Prof. Tony Bacic. The presentations were followed by an open panel discussion which was joined by LIAF'S Industry Engagement Director Prof. Marilyn Anderson and ISAAA SEAsiaCenter Director Dr. Rhodora Romero-Aldemita. The webinar's closing remarks were given by Dr. Mahaletchumy Arujanan, ISAAA Global Coordinator.