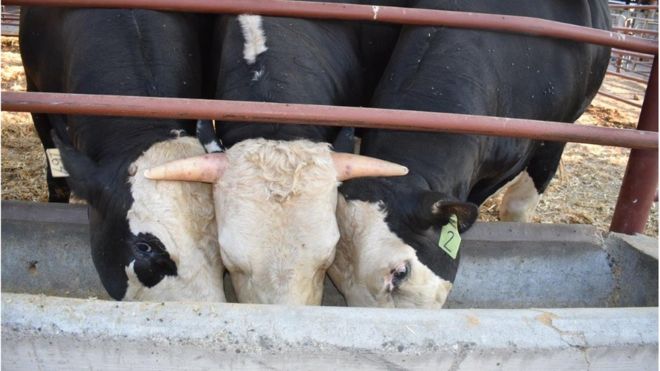 A horned bull is flanked by the hornless offspring of a genome-edited bull (Photo credit: Alison Van Eenennaam)

Scientists form the University of California, Davis, along with colleagues from the University of Mansoura in Egypt have successfully used genome editing to produce hornless cattle, which can then pass on the genome-edited traits to their calves. Their findings also revealed that the process did not result in any unintended genetic changes in the calves.

"We've demonstrated that healthy hornless calves with only the intended edit can be produced, and we provided data to help inform the process for evaluating genome-edited animals," according to co-author Alison Van Eenennaam, from the UC Davis department of animal science. She added that genome-editing presents a more humane option to dehorning or physically removing the horns, which is an issue among animal welfare advocates since it is a painful process.

After sequencing the genomes of the calves and their parents, a plasmid (short stretch of bacterial DNA) was incorporated next to one of the two hornless genetic variants. With the insertion of the plasmid, the genome-edited bull can technically be considered a genetically-modified organism (GMO) since it now has foreign DNA from another species. The researchers assured that the plasmid does not hurt the animal.

To date, only the AquaAdvantage salmon has been able to pass the rigid regulatory approval process of genetically-modified animals in the US.