Wheat is one of the leading food crops around the world. It provides roughly 20% of calories and protein for human nutrition globally.1 Just like other food crops, wheat can be affected by several diseases; and among the most destructive are the rust diseases. Wheat rust is air-borne and comes in three forms: stripe/yellow rust (Puccinia striiformis f. sp. tritici), stem rust (Puccinia graminis f. sp. tritici), and leaf rust (Puccinia triticina). When any of these fungi enters the wheat plant through its leaves, the fungus takes the nutrients from the plant cells, leaving the plant unable to grow or develop grains. This puts the farmers’ entire wheat field at risk of infection during the whole growing season.

Stem rust alone can cause global losses of 6.20 million metric tonnes, which is valued at USD1.12 billion annually.2,3,4 These growing losses threaten global food security, with significant impact in the lives of farmers, consumers, and the whole value chain. Thus, an urgent solution is necessary.

Experts have identified that the most durable, effective, and environmentally sound strategy to combat wheat rust is through genetic resistance. The 2Blades Foundation and its partners have developed the first genetically engineered wheat lines by stacking five resistance genes. Seedling assays in the greenhouse and adult plant tests in the fields have shown that the genetically engineered wheat plants remain unaffected even under high disease pressure; thus, preventing outbreaks efficiently. Broad-based resistance to the most virulent stem rust pathogen isolated was exhibited at the seedling stage.5

Given their different modes of action, combining the ASR and APR genes can provide a more effective and long-lasting resistance in commercially available wheat varieties.7,8,9

Rusts are known to evolve rapidly and can disperse large amounts of spores during infection. Thus, effective rust resistance requires stacks of several resistance genes. This has been achieved through conventional breeding. However, the process is extremely complicated and laborious. Large plant populations are necessary to integrate four or more genes, with multiple backcrossing, and intensive selection effort. The use of wild crop relatives is even more difficult due to low chances of getting transferred to other species, among other restrictions.10 Most importantly, since the resistance genes are in various locations in the genome, they will segregate in subsequent round of breeding with some progenies lacking the complete set of resistance genes.

A more effective way to confer durable and long-lasting resistance is through combination of multiple resistance genes in a common location on the chromosome with multi-gene cassettes. Gene cassettes are small mobile elements that contain a gene/s and a recombination site. Theoretical estimates show that combining ASR genes increases their strength, limiting the rust fungi’s virulence. Aside from its efficacy in combating pathogen virulence, the multi-gene cassette can be introduced to farmer-preferred cultivars more quickly and efficiently without introduction of deleterious genes. Furthermore, since the multi-gene cassette is inherited as a single genetic locus, the resistance genes will not be lost or separated as single units during segregation.

The 2Blades Foundation and its partners conducted a proof-of-concept study that showed that the use of multi-gene cassette is an effective strategy to boost wheat’s resistance to stem rust disease.5 Five stem rust resistance genes in a transgene cassette was introduced to bread wheat as a single locus (Figure 1). The resulting wheat lines are called the Big5.

Three seasons of field tests (2018-2020) showed that Big5 wheat lines have near-complete immunity to a US stem rust race (QTHJC) (Figure 2). At seedling stage, the lines also showed resistance to the most aggressive and highly virulent stem rust fungi isolated from different parts of the world. Since the five-gene cassette also contains the multi-pathogen APR gene Lr67, the Big5 wheat lines were also checked for leaf rust resistance. Assays showed up to 39% less infection compared the wild type control. Field studies evaluating stripe rust resistance from Yr46 is currently in progress. Once broad resistance to the three rust types is achieved in wheat, it would be a breakthrough that will significantly change wheat production globally. 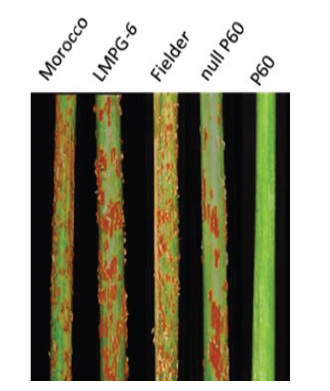 Gene cassettes are usually compact, carrying a single gene and a recombination site. Thus, with five large sized resistance genes, it is a challenge to develop a multi-gene cassette. The Big5 DNA construct encoding five genes was 37 kb in size, which also contains the selectable marker gene and T-DNA border sequences. This was made possible by an iterative Gateway recombinase cloning strategy that uses excisable lacZ selection for large-construct generation (Figure 3). 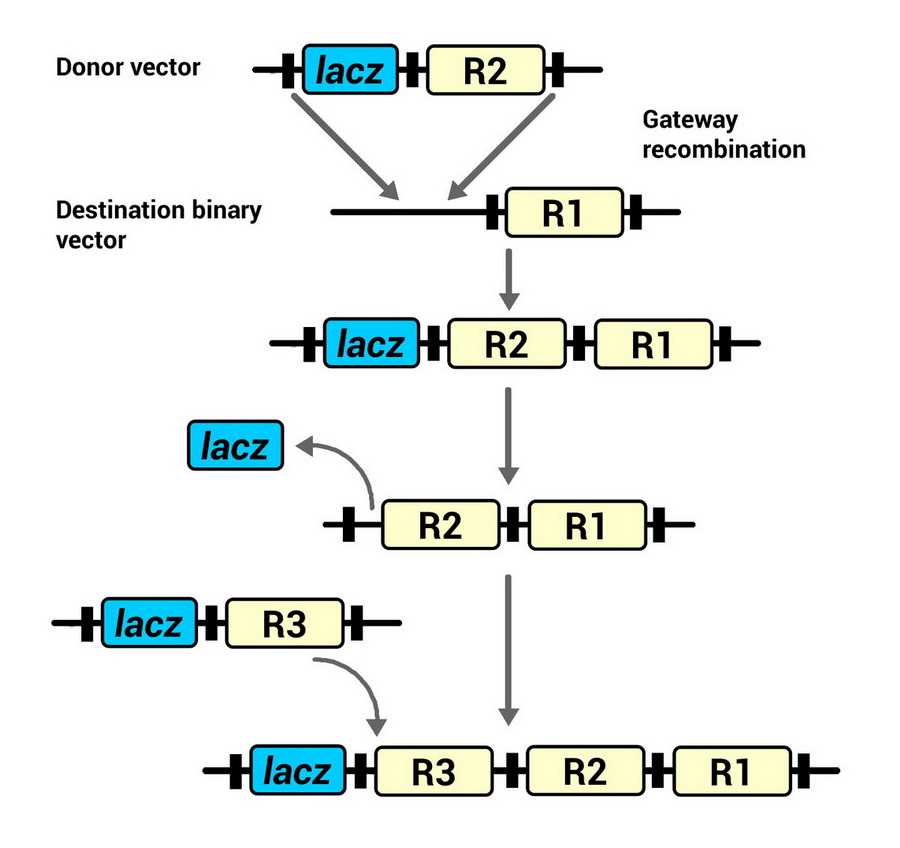 This cloning strategy has been proven to be highly effective, without the need for restriction enzyme site availability or sequence domestication, (i.e., removal of unwanted restriction sites like Golden Gate cloning). With this strategy, it is now possible to generate inserts that are more than 60kb in size containing up to eight resistance genes. This is the highest number of resistance genes and largest inserts to be introduced into crops using biotechnology to date. This strategy facilitates the development of more lines with optimum resistance against wheat rust diseases.

The research team aims to continue improving the cassettes and targets to remove the common cloning features such as selectable markers and vector borders, while using gene-editing tools. Once this is successful, the wheat lines will be considered as non-GMO in several countries including the US with its 2020 USA Sustainable, Ecological, Consistent, Uniform, Responsible, Efficient (SECURE) Rule.

The 2Blades Foundation and its partners expect to successfully develop new, effective, multi-gene cassettes that combine the strong resistance of ASR genes with the durability and broad-spectrum defense conferred by the APR genes. More resistance genes will be stacked into the crop to ensure robust and lasting protection against the destructive wheat pathogen that defies pathogen evolution for years or even decades. Stacking genes in a single locus will allow continuous breeding for vital traits such as resistance to biotic and abiotic stresses, as well as yield, height, or milling properties. The use of large stacks would also provide more insights into the application of multi-gene cassettes to confer disease resistance and other complex traits.

The 2Blades Foundation and a consortium of global partners, including CSIRO and the University of Minnesota, have worked for over a dozen years to address the major threat to food security posed by wheat rusts. Another significant partner is the International Maize and Wheat Improvement Center (CIMMYT), with which The 2Blades Foundation is working to introduce resistance genes in CIMMYT varieties and to distribute resistant lines through their breeding channels. These partners aim to ensure the crucial role of future varieties of wheat to meet the nutritional needs of the world’s growing population.