Pocket K No. 30: Contributions of Agricultural Biotechnology in Alleviation of Poverty and Hunger

In 2018, the number of chronically undernourished people in the world is estimated to have increased to 821.6 million, up from 811.7 million in 2017, according to the Food and Agriculture Organization of the United Nations (FAO).. The 2030 Agenda for Sustainable Development and the UN Decade of Action on Nutrition 2016–2025 call on all countries and stakeholders to work as one to eliminate hunger and malnutrition by 2030.

Agriculture remains predominantly traditional and majority of African countries exhibit a high dependency on food aid, which accounts for a quarter of all global food aid shipments. Reversing this trend requires strategic interventions that would dramatically raise agricultural productivity while taking into consideration realities and diversity of Africa’s farming systems. 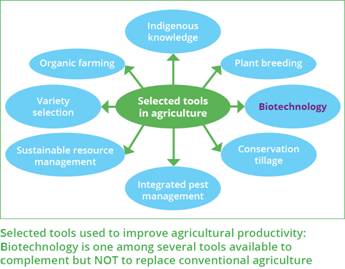 Agriculture accounts for 70% of fulltime employment, 33% of total GDP and 40% of total export earnings in Africa. Yet, productivity level of most crops fall below global averages.
• At the onset, African farmers face a multitude of highly complex and interrelated problems.
• No single approach will provide solutions to the declining agricultural productivity trends
• Conventional crop improvement ALONE will not cause a dramatic "quantum jump" to bridge the huge food deficit and poverty face of Africa.

The Case for Modern Agricultural Biotechnology

Biotechnology enables diverse applications in agriculture, health, industry and the environment. Overwhelming evidence demonstrates that biotechnological tools — tissue culture, genetic engineering and molecular breeding (marker-assisted selection) continue to provide promising opportunities for achieving greater food security while improving the quality of life. Biotechnology however is not a magical bullet. A high quality seed requires good agronomic practices, appropriate inputs and support services for the farmer to reap benefits. The comparative advantage of currently available biotech crops is the built-in defense against insects and tolerance to weed killers making them suitable for the average farmer. The technology is scale neutral and with proper stewardship, even the very small farmers benefit.

Experiences and Evidence from Africa

As of 2018, South Africa, Sudan, and eSwatini were the African countries with commercialized biotech crops.

Sudan has been planting Bt cotton since 2012. Some 243,000 hectares of Bt cotton were planted in 2018, up from 192,000 hectares in 2017. This was a major breakthrough in the cotton industry of the country because cotton production has been declining in the past couple of years due to bollworm infestation.

Besides reduction in pesticide residues, biotech crops have potential to increase the nutritional value of foods and enhance human health in various ways:

In 2018, a total of 13 countries in Africa sustained various activities from planting, evaluating trials or granting approvals for the general release of various biotech crops. Other research highlights in 2018-2019:

With over a decade of production and consumption, biotech food and feed products depict a history of safe use with no credible evidence of risks to human health or the environment. This has been confirmed by a number of reputable independent scientific bodies such as the National Academies of Sciences, Engineering, and Medicine (U.S.), Research Directorate General of the European Union, the French Academies of Sciences and Medicine and the British Medical Association.

In May 2004, the Food and Agriculture Organization (FAO) of the UN reported: “to date, no verifiable untoward toxic or nutritionally deleterious effects resulting from the consumption of foods derived from genetically modified foods have been discovered anywhere in the world.”

Moving into the Future

Responsible and safe deployment of modern biotechnology can significantly enhance prospects for alleviating poverty and hunger in Africa. To realize the technology’s potential however, African governments should create an enabling policy environment and conducive institutional arrangements for investment in R&D and commercialization of these products. Mechanisms to facilitate access to proprietary technologies and to invigorate the public sector towards development of products relevant to local conditions should be strengthened.

One of the major constraints to acceptance  of modern biotechnology in Africa is misinformation. This continues to influence adoption and policy choices. Generation of accurate and science-based information is therefore crucial to informed decision-making, which would lead to greater appreciation of the contributions of biotechnology to food security and wealth creation.

Next Pocket K: Biotechnology with Salinity for Coping in Problem Soils