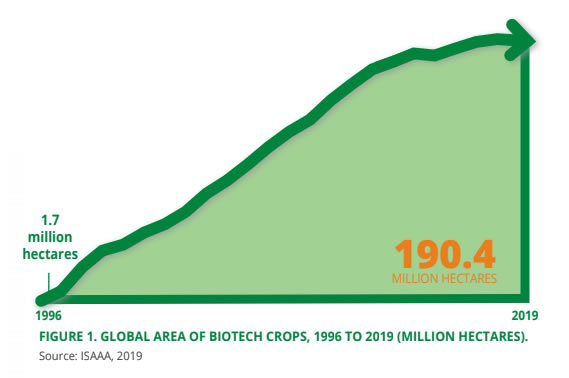 Distribution of Biotech Crops, by Country

The most planted biotech crops in 2019 were soybean, maize, cotton, and canola. Although there was a 4% reduction in the planting of biotech soybean, it maintained its high adoption rate of 48% of the global biotech crops or 91.9 million hectares. This area was 74% of the total soybean production worldwide in 2019 (Figure 3). 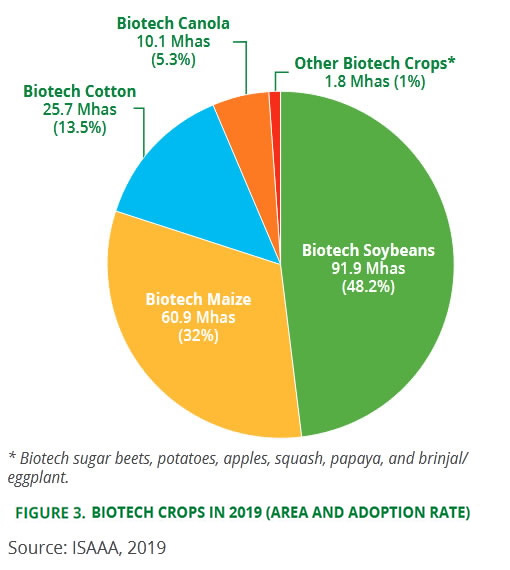 About 17 million farmers, mostly from developing countries, adopted biotech crops because of the improvement in their socio-economic conditions. For the last 23 years (1996-2018), global economic gains from biotech crops reached US$224.9 billion.

Aside from the economic benefits, biotech crops also contributed significantly to food security, sustainable development, and climate change mitigation from 1996 to 2018 through the following:

The continuous adoption of biotech crops for 24 years has contributed to alleviation of global problems of poverty, malnutrition, food insecurity, crop diseases, and climate change. In 2019, the accumulated biotech crop area has reached 2.7 billion hectares (6.7 million acres) since 1996. Scientists all over the world are also combining their efforts to develop new biotech crops and traits that will be beneficial to farmers and consumers.

With public engagement initiatives to ensure public acceptance and facilitate enabling policies, the numerous benefits of biotechnology will continue to provide solutions and opportunities to resource-poor farmers and their families, as well as the growing global population in need of sustainable resources for survival.