Government Spokespersons Impressed by Progress in Agri-biotech Research in Uganda 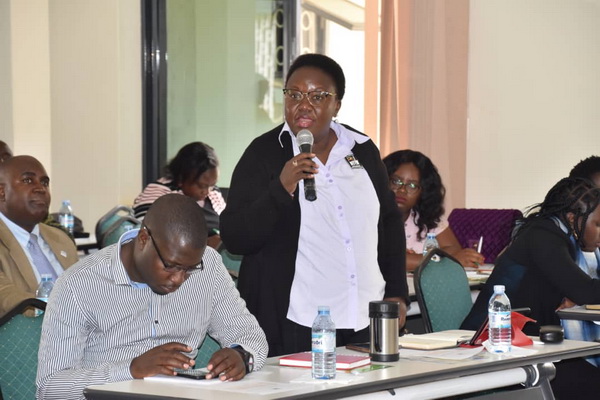 Over 60 spokespersons from various government ministries, departments and agencies (MDAs) were excited by the scale of progress made in agricultural research in Uganda. The spokespersons attended an engagement organized by National Agricultural Research Organization (NARO) through its information-sharing hub, the Uganda Biosciences Information Center (UBIC), at the National Crops Resources Research Institute (NaCRRI) at Namulonge on July 10, 2019.

After touring the biotechnology laboratories at NaCRRI, Hellen Kaweesa, the Parliament spokesperson, wondered why all the progress made in agricultural biotechnology research in Uganda has not yet convinced the "responsible persons" to enact the relevant biosafety law. "Are the scientists hiding something from us," she wondered. In response to her concern, Dr. Barbara Mugwanya Zawedde, the coordinator of UBIC, emphasized that such concerns can be addressed by having a functional biosafety system, supported by a relevant legislation, which looks at each technology and/or product on a case-by-case.

Speaking after the engagement, Peter Kaujju—spokesperson for Kampala Capital City Authority—said, "In the quiet precincts of Namulonge, Wakiso District near Kampala City, you find great people on a great mission to transform our agriculture. Many groundbreaking innovations in crop resources, livestock health, aquaculture and genetic engineering among others. Great job NARO Uganda!" NARO continues to use appropriate modern biosciences to address challenges, and add value, to a variety of crops and animals of strategic national importance in Uganda.

The Government spokespersons requested that NARO creates a glossary and FAQs on agricultural biotechnology, and have these widely disseminated during various fora and on online platforms to facilitate sensitization efforts on such technologies.