ISAAA Brief 47: The Status of Commercialized Bt Brinjal in Bangladesh 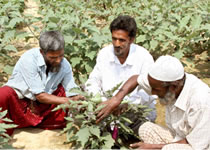 Bangladesh is the first country in the world to approve the commercial planting of four varieties of the insect resistant Bt brinjal on October 30, 2013. Subsequently, 20 farmers planted Bt brinjal seedlings on over 2 hectares (each on 1 bigha equivalent to 0.13 ha) in four brinjal growing regions of Gazipur, Jamalpur, Pabna/Ishurdi and Rangpur in the spring season 2014. Notably, Bt brinjal allowed farmers to raise healthy and vigorous brinjal crop, substantially cut down pesticide sprays to control fruit and shoot borer (FSB), considerably decreased cost of cultivation and significantly increased marketable yield.

Suggesting a coherent approach on information and knowledge sharing on Bt brinjal in Bangladesh, Minister Chowdhury emphasizes that "we accord the highest priority to the safety and benefits to the society but shun any activity that intends to spread misinformation and misguide the public about Bt brinjal or other products that are evaluated by public sector research institutions."

Presenting the field level experience and evidence, Brief 47 also encapsulates the testimonials of experts and farmers attesting the benefits of Bt brinjal after a bountiful harvest in the first cropping season 2014. The Brief also presents a set of Bt brinjal photos from farmers' field and a collection of highly cited references on Bt brinjal in Bangladesh.