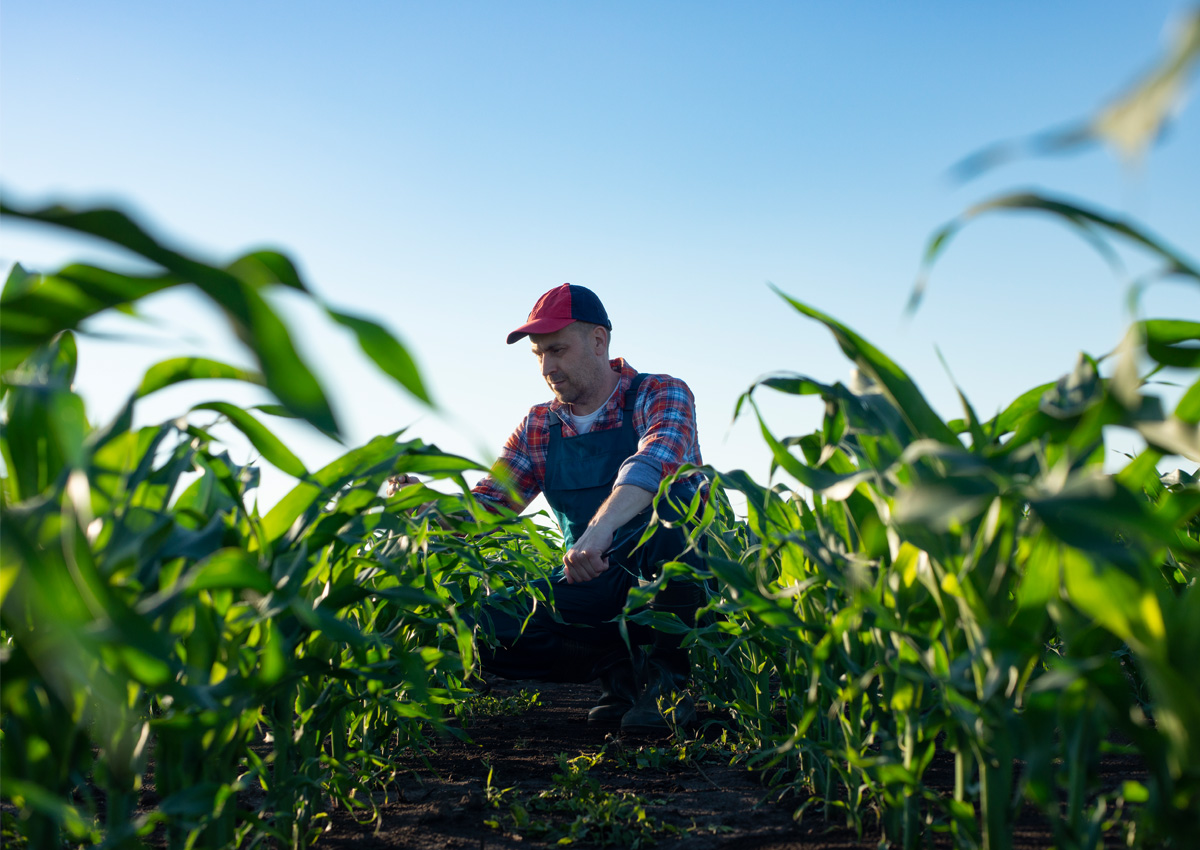 In 1996, six countries planted biotech crops for the first time in a total of 1.7 million hectares. These six “founder countries” included the USA, China, Argentina, Canada, Australia, and Mexico. Since then, the global area planted for biotech crops has consistently increased, with significant expansion recorded in developing countries. In recent years, more countries adopted biotech crops and many farmers have repeatedly planted these crops because of their enormous benefits to the environment, human and animal health, and contributions to the improvement of socioeconomic conditions of farmers and the general public. In 2019, more than 17 million farmers from 29 countries planted biotech crops.

Biotech crop adoption in the top five biotech crop-growing countries reached close to saturation. The major biotech crops planted and adopted by the 29 countries include soybeans, maize, cotton, and canola. Based on the global crop area for these crops, 79% of cotton, 74% of soybeans, 31% of maize, and 27% of canola were biotech crops in 2019.

In recent years, more biotech crops were developed beyond the major four crops to offer choices for many of the world’s consumers and food producers. These crops include alfalfa, sugar beets, sugarcane, papaya, safflower, potatoes, eggplant, squash, apples, pineapple, wheat, and cowpea.

Since the first year of their commercial release, biotech crops have helped in increasing the income of small and resource-poor farmers, contributing directly to the poverty alleviation of a large majority (70%) of the world’s poorest people. Biotech crops have contributed to uplifting the economic situation of more than 17 million small farmers and their families, totaling >65 million people, who are some of the poorest people in the world.

Farmers from different regions and countries planting biotech crops have cited many benefits that they enjoy from planting biotech crops. These benefits include higher income, reduced pesticide use, being able to pay for their children's education, upgrading their farming equipment, and having peace of mind.

Ma Congbiao from Xinji City in China's Hebei Province plants biotech cotton. She said that planting Bt cotton helped them save labor and time. Pests on their farm were also minimized and pesticide use was reduced. The most significant benefit of planting biotech cotton for her family is the increased yield, which allowed them to earn more. "We have acquired new appliances and furniture for our house. Compared with the past, our life has really improved," she added. 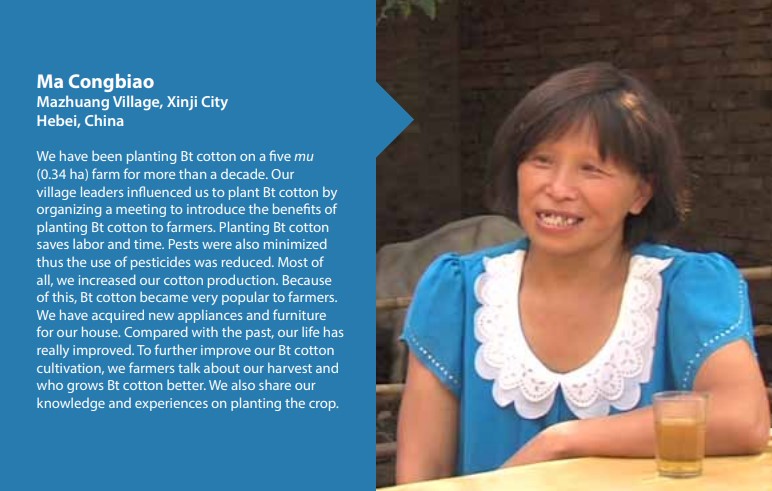 Chen Jianbin, also from Xinji City in China's Hebei Province, plants biotech cotton. He said that they were introduced to Bt cotton by company workers who visited their village and distributed seeds. Chen said that planting biotech cotton has lots of benefits because they save labor and time, and their income has increased because the yield is also high. He shared that they have built a big house, earned more money, and now live a better life.

Vijay Atmaram Ingle, a third-generation cotton farmer from Maharashtra, India, was one of the first farmers to join Mahyco’s Bt cotton field trials. Planting biotech cotton helped him send his children to college. He said, "Among the benefits I gained from Bt cotton cultivation are the increase in my income which has tripled in the last ten years; improvement of my social status; ability to afford higher education for my children; acquisition of additional 8 acres of land in 2010; establishment of a dairy farm with 100 animals and other businesses; and building a Pucca (cement) house." 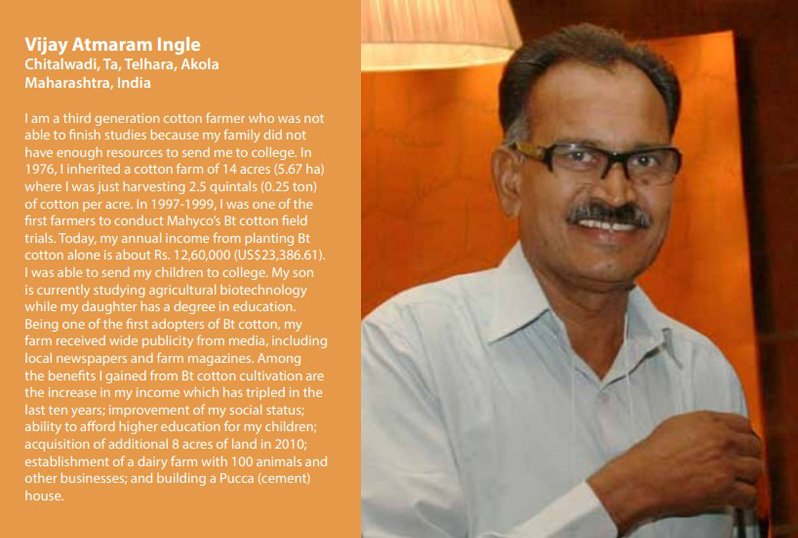 Venkatayya from Andhra Pradesh, India plants biotech cotton. He said that their yields were poor when they were still planting conventional cotton varieties. "After using Bt cotton seeds, we now yield 1 ton. We are using less insecticide and the crop quality is good. Before, we had debts because we spent a lot on insecticides. We are clearing those debts now with the profits from Bt cotton." 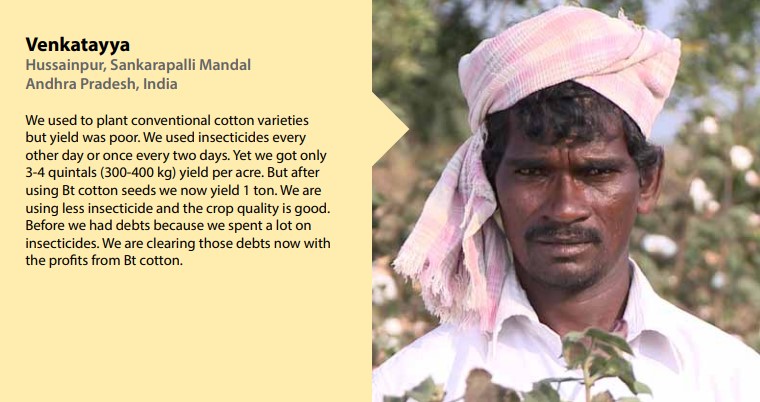 Pablito Lobendino from Isabela, Philippines plants biotech corn. He was introduced to Bt corn by seed company technicians. When they tried biotech corn, it reduced their production costs and their yield was higher. Palito said, "When we were not yet planting biotech seeds, there was barely money left because you spend a lot, particularly to remove weeds. When we started to plant biotech seeds, we earned a decent profit." 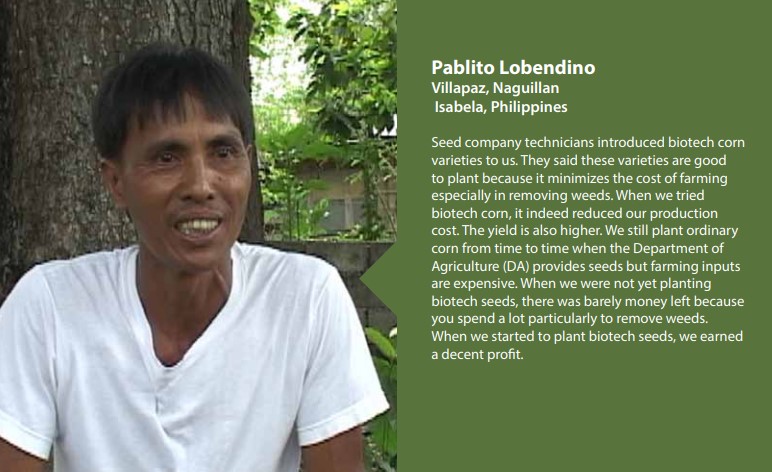 Corazon Cabasag and her family from Cagayan in the Philippines plant biotech corn. She said, "Bt corn indeed gives more yield than the ordinary corn since the latter is prone to borer infestation and you also have to apply insecticide. You will really see the big difference between ordinary corn and Bt corn. Because of Bt corn, we were able to acquire a big thresher." 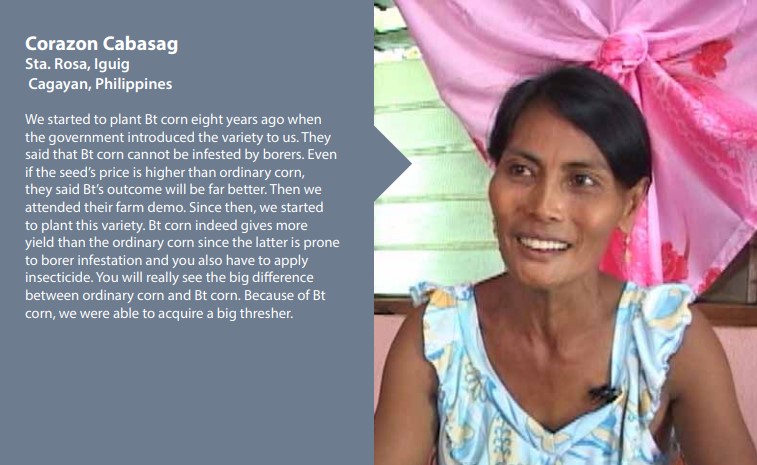 Biotech crops contribute to food, feed, fiber security, and self-sufficiency. Biotech crops play an important role in increasing productivity per hectare and decreasing the cost of production as a result of the reduced need for inputs. From 1996 to 2018, crop productivity increased by 822 million tons valued at US$224.9 billion, and 86.9 million tons valued at US$18.9 billion in 2018 alone.

The important and urgent concerns about the environment have implications for biotech crops, which contribute to a reduction of greenhouse gases and help mitigate climate change. The combined permanent and additional savings through sequestration was equivalent to a saving of 23 billion kg of CO2 or removing 15.3 million cars off the road for one year.