What is the Difference Between Genetic Engineering and Gene Editing?

Genetic engineering and gene editing might sound the same, but for scientists and regulators, the distinction between the two is vital.

From the wild to conventional breeding

Before tackling the differences between these two techniques, it is important that we talk about conventional breeding methods first.  The crops that we cultivate now used to be found in the wild with a different set of characteristics. For example, corn originated from a wild grass called teosinte. Through years and years of domestication, this wild grass was improved to meet our needs for food, clothing, and energy.

With the advancements in science, plant breeders have used techniques to develop new varieties of crops by selecting plants with better traits and including these plants in future crop improvement programs.    One of the most popular methods to do this is called hybrid seed technology, wherein improved seeds are developed through crossing distinctly different pure parental lines. However, it takes several years for breeders to generate plants with the desired characteristics. Thus, experts have developed more precise techniques that require shorter time to attain the expected results.

From conventional to modern biotechnology

The modern techniques for crop improvement are generally referred to as genetic modification or genetic engineering. Through this technology, a gene that codes for a specific characteristic is transferred into another organism that needs that trait. For example, an insecticidal gene from a soil microorganism can be transferred to corn plants to develop insect resistant corn. A plant gene can also be switched off or boosted to improve a specific trait without the need to insert a gene from other organisms.

In 2019, 190.4 million hectares were planted with genetically engineered or biotech crops in 29 countries. Because of its numerous benefits, it has become the fastest adopted crop technology in the history of modern agriculture. 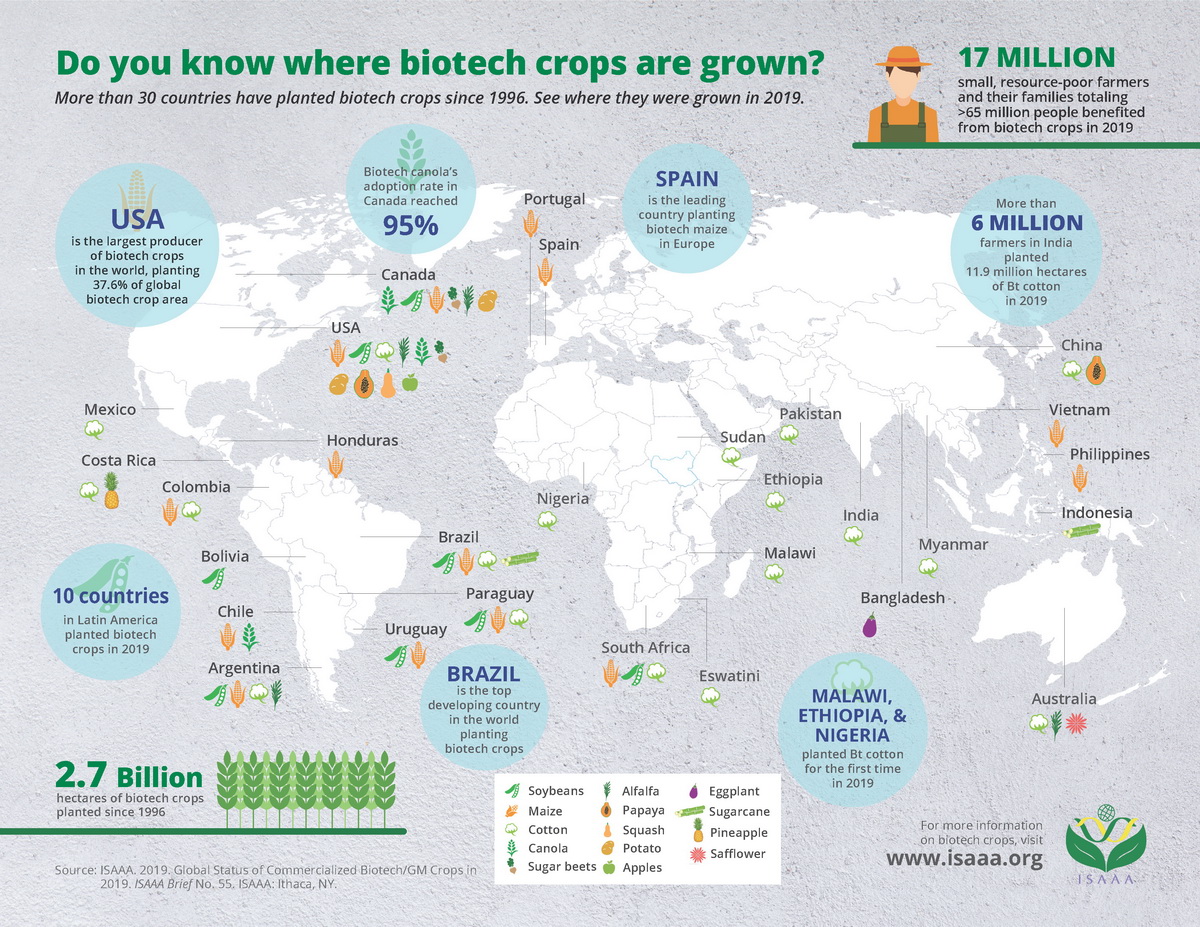 As researchers continuously search for better ways to improve crops for food security, new breeding innovations have been developed. The latest technique used by crop scientists is called gene editing. It is the process of making a targeted change in the DNA of a living organism in a more precise, quick and cheaper way compared to genetic engineering.

Scientists often describe it as something like editing a word document on your computer. You can change a portion of that document by finding a certain word or phrase. You can either delete that word, replace it with a better word, or add another word to improve your document.

The most famous tool to date is called CRISPR-Cas9, which was adapted by scientists from some bacteria’s natural gene editing system that they use in response to invading pathogens. Other tools such as TALENs, zinc-finger nucleases, and meganucleases are also available.

Because of its ease of use and versatility, gene editing has numerous applications, and one of which is developing genetically modified (GM) crops. On the other hand, there are many other methods to produce GM crops.

The distinction between genetic engineering and gene editing is important most especially for regulations. Products of genetic engineering containing a piece of foreign DNA must go through a rigorous process before they become available in the market for public use. For some countries, gene-edited products are considered as GMOs, thus they have to go through the biosafety process before release. On the other hand, some countries consider the presence of a foreign DNA in the gene-edited product. Without a foreign DNA, the gene-edited crop is considered as a product of conventional breeding and would not have to go through the process of approval before commercialization.

One of the first products of gene editing is the heart healthy soybean oil called Calyno. Using TALENs, the researchers increased the oleic acid content of soybean oil by 80% and reduced saturated fat by 20%. It has been sold in the US market since 2019 and has been well-received by the food industry.

Subscribe to the Crop Biotech Update to get the Genome Editing Supplement.