Hope for the Harvest

At the earliest light of day, farmers march to their fields with the hope of a good harvest. They till their land, plant seeds, and perform farming practices that they deem helpful to grow good crops and get high yields. A Filipino folk song best describes the life of a farmer in the field: Magtanim ay ‘di biro (Farming is not a joke).

On the other side of the field, scientists are growing crops not for the yield but to harvest information about the biotech crops they are studying. They carefully follow research guidelines alongside the safety protocols implemented by the government with the hope that after all the backbreaking work; the crops they develop will eventually crossover to the farmers’ fields.

The tale of two Bt crops

In the Philippines, genetically modified (GM) maize resistant to a major insect pest and specific herbicides continues to be one of maize farmers' best options. After over a decade of commercializing biotech corn, the Philippines has achieved self-sufficiency and has a surplus for export. In 2018, the lives of 673,000 farmers and their families have improved due to biotech corn planting. 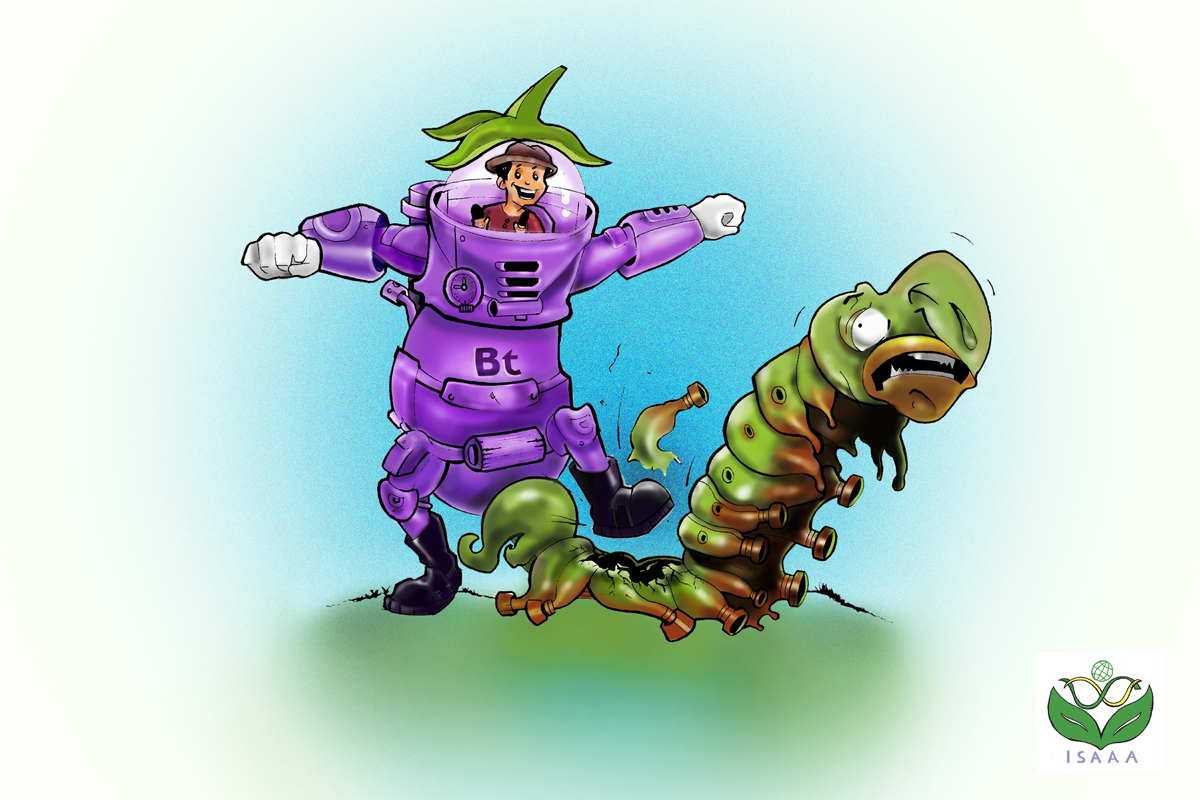 Eggplant, the top vegetable in the country, has been developed by the University of the Philippines to be resistant to its major insect pest – the fruit and shoot borer. The research started in 2003 following the strict rules implemented by regulatory government agencies. Alongside the conduct of the study, scientists and science communicators were equipping the public with facts about the biotech crop, which could potentially be one of the first GM food crops in the country. These efforts continued until the last leg of the research, which ended with a bang — biotech critics filed Writ of Continuing Mandamus and Writ of Kalikasan against the biotech crop in 2012.

Guided by the precautionary principle and the infamous Gilles-Eric Séralini’s journal article linking cancer to GM herbicide tolerant maize, the Philippine Court of Appeals gave the favor to the vigilant environmentalists’ plea to stop the trials in 2013. The following year, Séralini's paper was retracted by Food and Chemical Toxicology journal due to its questionable methodology which includes a low number of samples and the use of Sprague-Dawley rats that are tumor-prone.

The respondents to the case filed an appeal to review the case but the Court of Appeals affirmed its ruling that the trials violated the people’s constitutional right to a balanced and healthful ecology.  The respondents thus elevated the appeal to the Supreme Court for review.  Interventions from farmers and other organizations were submitted to the court to reverse the earlier ruling. In December 2015, the Supreme Court declared that the testing of Bt eggplant should be stopped, even if the field tests were completed before the filing of the case. For another blow to the scientific community, farmers, and food/feed processors, the High Court also invalidated the Department of Agriculture Administrative Order No. 8, which covers the importation and/or release to the environment of GM plants. The hurdles did not end there, as the Supreme Court ordered a new set of regulations that will deal with GM crops.

In March 2016, five government agencies released a new set of regulations for GM crops, based on multisectoral public consultations handled by the National Committee on Biosafety of the Philippines. After four months, farmers, researchers, and the rest of the community were surprised with another announcement from the Supreme Court. In a unanimous decision, the High Court reversed its earlier decision to stop the trials and granted Motions for Reconsideration submitted by the Bt eggplant developers and co-petitioners.

Notably, in 2021, the Bureau of Plant Industry released a biosafety permit for direct use as food, feed, and processing of Bt eggplant after careful assessment by experts who found the crop to be as safe as conventional eggplant varieties. This regulatory milestone puts more hope for the farmers to avail of the technology in the next few years. The last step in this regulatory journey is to gain cultivation approval on Philippine soils.

Will Bt eggplant see the light of day in the Philippines soon? 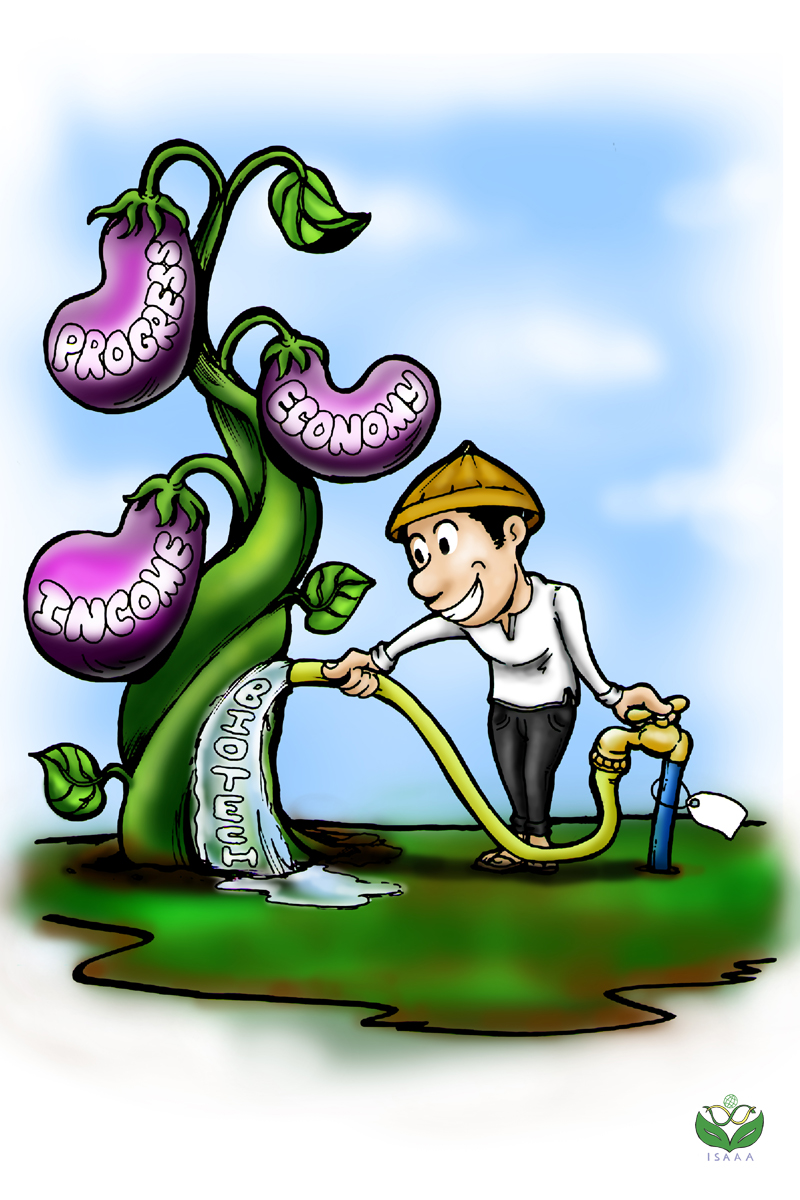 Socio-economic experts have projected the potential benefits of Bt eggplant in the Philippines. Based on ex-ante case studies, the average potential benefit of planting Bt eggplant ranges from 2,753-6,243 USD per hectare more than conventional eggplant varieties. This significant addition in profit is attributed to increased marketable yield and reduced pesticide use. In addition to higher income, there will also be a reduction in pesticide use by almost 50 percent, which also means a 19.5% decrease in environmental footprint. Because of a decrease in pesticide use, health and environmental benefits will also be acquired. It is estimated that at a 50 percent adoption rate of the crop, the benefits to human health are valued at 57,353 USD per year while the collective benefits to farm animals, beneficial insects, and birds are estimated to be 155,841 USD per year. With the delays in commercializing Bt eggplant, the Philippines is losing Php 33.85 billion annually.

Many Filipino farmers are eagerly waiting to take hold of the Bt eggplant seeds. They are hankering for solutions because they are tired of getting infested produce that affects their families’ income. This could be the reason why a lot of eggplant farmers in the country are dipping their eggplant crops in a concoction of insecticides. They are out of options.

Setbacks and breakthroughs in South Asia

In South Asia, the same biotech crop also faced trial after trial. In India specifically, Bt cotton has been proven to be safe and highly adopted by farmers since 2002, but Bt eggplant or brinjal still faced obstacles. In 2010, a ten-year moratorium was imposed on the introduction of Bt brinjal developed by Mahyco. Exactly a decade after, two Bt brinjal varieties developed by the Indian Agricultural Research Institute were approved for field trials only to be halted again in 2021 due to the objections of civil society groups.

Farmers in the densely populated country of Bangladesh finally got a taste of the benefits of crop biotechnology in 2014. Due to strong political will, Bt brinjal was approved for cultivation in 2013 and 20 small farmers planted the first seedlings of Bt brinjal on their fields in 2014. Five years after, 34,500 farmers have adopted the technology. The farmers reported a 13% higher yield, 21% improvement in gross return, and 83% higher net income compared to those who planted non-Bt brinjal varieties. This breakthrough serves as an inspiration for other countries that are hoping to grow biotech crops in the coming years. As for the Philippines and India, hope remains in the hearts of farmers and scientists that this crop developed to minimize pesticide use and protect farmers’ health would eventually reach the farmers’ fields in due time.

The moral of the story

These stories highlight two main characters in the spotlight: the scientists and the farmers. Scientists take two vital roles in the field of biotechnology: one as a researcher and another as a communicator. In a study conducted by the International Service for the Acquisition of Agri-biotech Applications (ISAAA), it was shown that scientists devote only a small portion of their time for public engagement due to the high demand for their research work and other responsibilities. Though there are science communicators who are trained to fulfill such tasks, the scientists are still on top of the credibility ladder to deliver facts on GM crops to the public. Thus, their efforts are highly needed to feed the minds of the public with the right knowledge about biotech crops.

The farmers are the main protagonist in the story of biotech development. The primary goal in developing biotech crops is to be able to help farmers increase their yields and incomes by addressing their major concerns such as pests, weeds, and other stresses. Thus, the first generation of biotech crops is focused on developing the insect resistance and herbicide tolerance of crops. 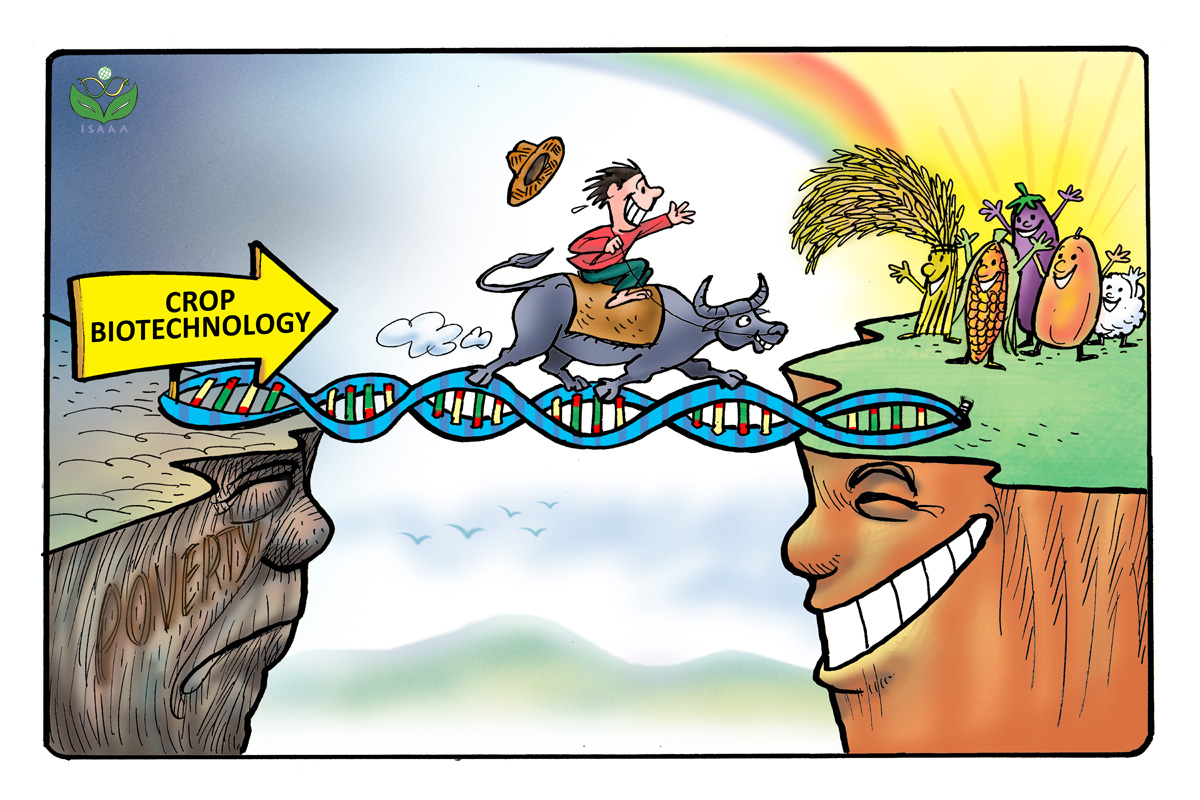 Just like any technology, biotechnology does not answer all of the farmers’ concerns. However, with the documented benefits of biotech crops, such technology cannot be denied for farmers who are looking for solutions to their farming problems. After all, they have a huge task of bringing food to our tables. By 2050, the world’s population may reach close to 10 billion, demanding for doubling of present global food production. With this demand, every tool in agriculture’s toolbox is necessary to mend hunger, malnutrition, and poverty.