Gene Drive: The Technology and its Potentials for Biodiversity Conservation

Gene drive is a gene editing tool that is rapidly advancing as scientists investigate further its potentials to address concerns related to agriculture, the environment, and even human health. To help the public understand it better, ISAAA and its network of Biotechnology Information Centers, in partnership with the Outreach Network for Gene Drive Research, launched the four-part Gene Drive Webinar Series. Gene drive experts were invited to talk about the technology and how it can help conserve biodiversity during the first two sessions of the series. 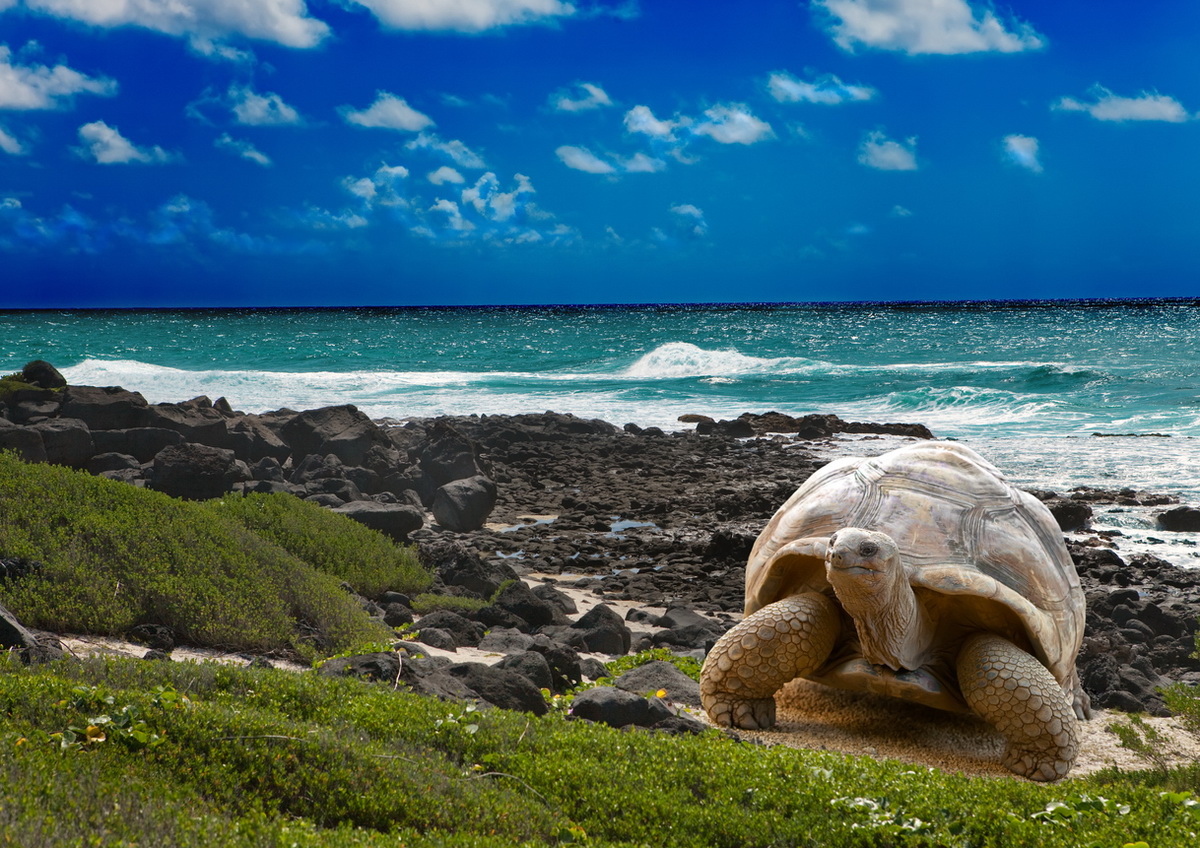 Dr. Paul Thomas, Director of the South Australian Genome Editing Facility and the Director of the Genome Editing Program of the University of Adelaide/South Australian Health and Medical Research Institute provided a brief overview of what gene drives are and how they work. "We talk about gene drives as though it’s a single concept," he said. "There are many different types of gene drives that we can think about and design. The emergence of CRISPR technology has really given a lot of impetus to this research. It’s really one of the driving forces behind this new wave of technologies that are emerging." 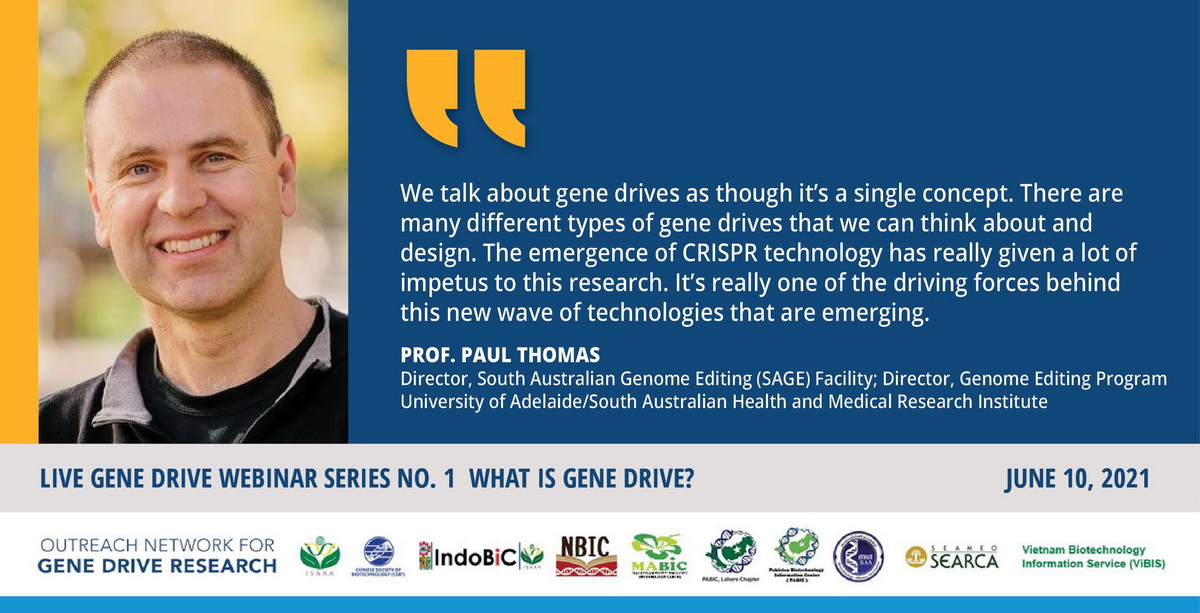 Thomas then explained how gene drive strategies can be used to address the rodent plagues in Australia, particularly the CRISPR homing gene drive strategy and the X-Shredder chromosome shredding strategy. The former inserts a gene drive element into a recessive female fertility gene that results to infertile female organisms thereby helping control the population of the species. The latter, on the other hand, allows the gene drive element in the Y chromosome to target-repeat itself causing it to shred during spermatogenesis. This results in male biased offspring with no females to support the species population. Both strategies are effective in controlling the target species population, and these strategies were found to be most effective on mosquitoes and mammalian rodents.

Dr. Prasad Paradkar of the Commonwealth Scientific and Industrial Research Organisation (CSIRO) further described how gene drives can help control vector-borne diseases like malaria which are spread by mosquitoes. He cited the Release of Insects Carrying a Dominant Lethal (RIDL) technology developed by Oxitec wherein male mosquitoes with the OX513A gene mates with female mosquitoes. The gene then causes the death of the offspring during the late larval stage. In May 2021, the US approved the first field test of GM mosquitoes in Florida with the aim of assessing the control of the spread of mosquito-borne diseases like Dengue, Zika, Chikungunya and Yellow Fever.

While gene drives seem to be a promising solution to challenges in human health and agriculture, the technology is still not widely popular globally. This is partly due to the lag in international regulations to govern over this fast-emerging technology. 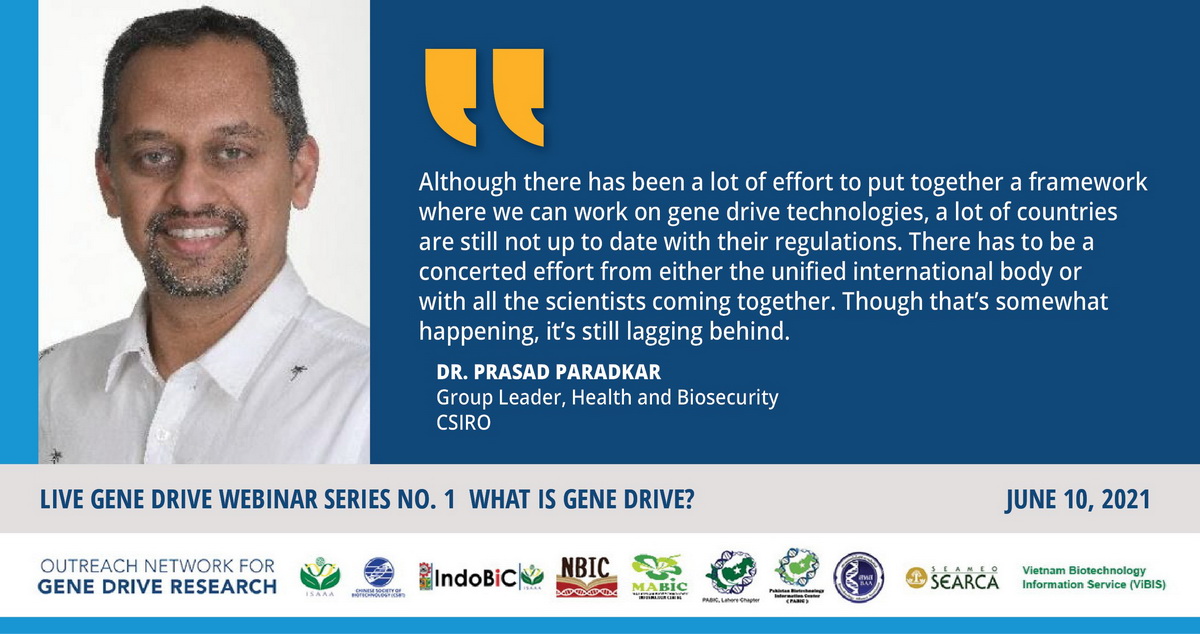 Social acceptance is another challenge faced by gene drive technology developers. As gene drives are intended to be released in the environment, communities within the area of its implementation are mostly concerned of its effects to them and their surroundings. Technology developers have then become cautious that not only should they be guided by their own set of values, but the values of the stakeholders as well. "A question that should be addressed is, ‘Should we do it?’ That guides our approach to all our projects," according to Dr. Patty Baiao, US Head of Operations of Island Conservation. "Meaningful social engagement is paramount. We strive to engage communities as much as we possibly can and our overall strategy is one of transparency and sharing accurate information so that both the potential risks and the potential benefits are understood and folks can make informed decisions about whether or not it is the appropriate intervention that serves their set of values and not just ours," she explained.

Baiao’s work involves the control of invasive species in islands. The alien species often establish and overrule native species which causes an imbalance in the structure and species compositions in island ecosystems. She cited the Genetic Biocontrol of Invasive Rodents (GBIRd) Program, which uses a gene drive approach wherein genetically modified mice are introduced into islands to control the population of the invasive species of rodents without affecting the non-target species. According to Baiao, the strategy has a high success rate in eradicating them in their target islands thus resulting to a quick recovery of the ecosystem.

Dr. Owain Edwards of CSIRO shared details about his work in using gene drives to try and control mice plagues in Australia. Like Paradkar, he focused on the gene homing device and X-Shredder strategies. He provided insights about how these strategies provide an option to spread genetic control technologies that would not be possible due to the scale of the target species. He also noted that while gene drives may increase the risk of unintended effects, these can be mitigated using technologies that make them self-limiting in space and time. "If the gene drives are designed properly to target sequences that are very unique to the target species, and even if those that gene drive escapes through horizontal transfer or through hybridization into another species, it won’t have the function of being a gene drive (to non-target species). It won’t have a sequence to target. It will not spread in the same way in another species as it would in the target species," he said.

Environmental and public safety are two of the key considerations in designing gene drives. Experienced technology developers always take a step ahead and incorporate mitigations in their strategies. "Just as important as having a drive system that works is having a safety switch incorporated into it that would limit either its number of generations or somehow fix it on the target species and the target population that you want to address," Thomas said in support of Edwards’ statement. "It’s going to be a really big challenge as much as getting the drive working as to come up with a safety switch that would enable us to deploy it safely within a target population because we do not want to eradicate every mouse in the world. Those safety switches are very important in this field of research," he added.

Edwards, like Paradkar, also emphasized that strong regulations will play a role in the proper design and implementation of gene drives. "it’s important that we aim to release it into countries that have very strong regulatory regime that will look very stringently at the design of these gene drives to make sure that questions such as the specificity of the target are addressed and the evidence is produced that that sequence is not present and is not likely to present in any other species within the environment."

Dr. Andrew Veale of the Manaaki Whenua Landcare Research gave more insights about the challenges that need to be addressed when considering gene drives, and these include the potential resistance of the target species, species interactions, extinction of species and recolonization dynamics. Moreover, gene drives greatly depend on the generation time of the target species. While the effects of gene drives may be felt more quickly for smaller animals like mice, it may not be the case for bigger predators like stoats and possums in New Zealand. However, Veale said that gene drives still provide opportunities to help reverse biodiversity loss due to invasive alien species. "There are a lot of technical challenges in eradicating pests beyond just the genetics, but there is optimism in the ability of gene drive tools to assist in conservation goals," he concluded. 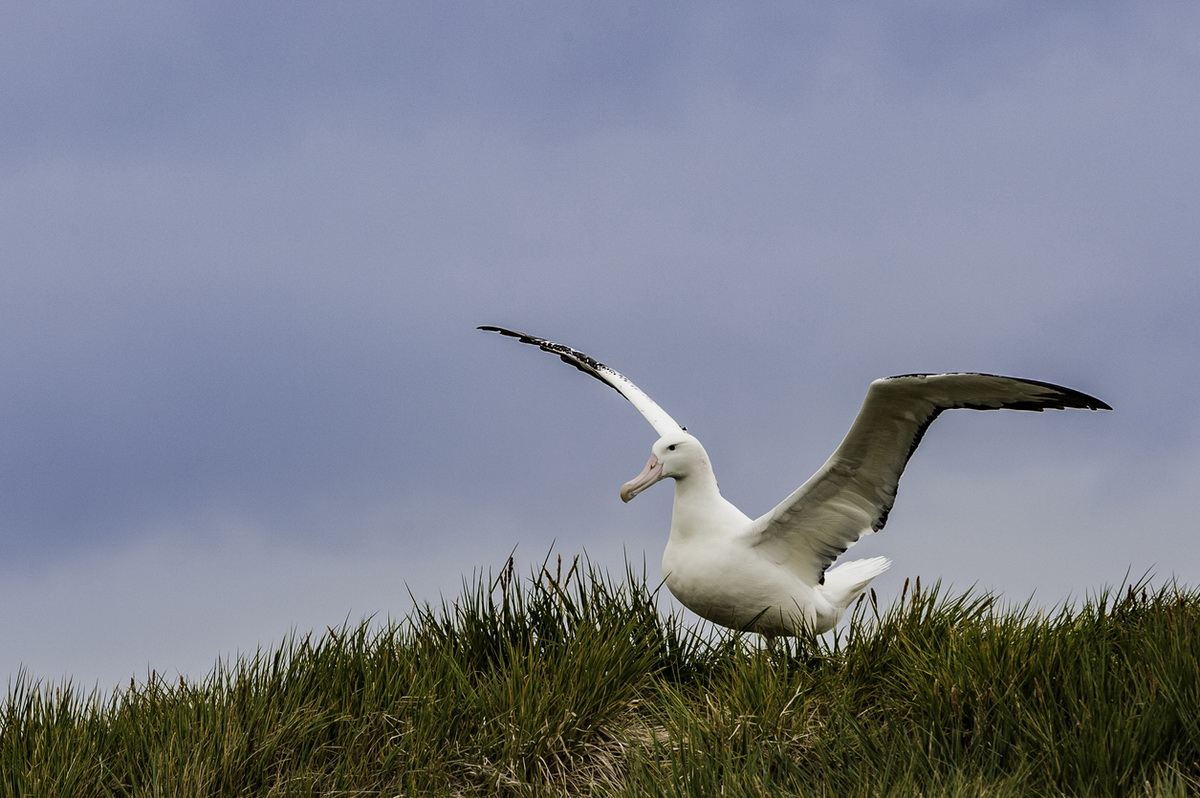 The Gene Drive Webinar Series will have two more sessions that will tackle the elimination of vector-borne diseases and the regulatory and governance considerations for gene drive research. Stay updated by subscribing to the Crop Biotech Update or following isaaa.org on Facebook, Twitter, and Instagram. Webinars 1 and 2 are available on the ISAAA YouTube Channel.


Science Speaks is ISAAA Inc.'s official blog. Weekly blog articles, authored by ISAAA writers, partners, and invited contributors, aim to help share, disseminate, and promote scientific knowledge and its vital role in achieving global agricultural sustainability and development. Your support to Science Speaks will help us achieve this goal. You can help us by donating as little as $10.