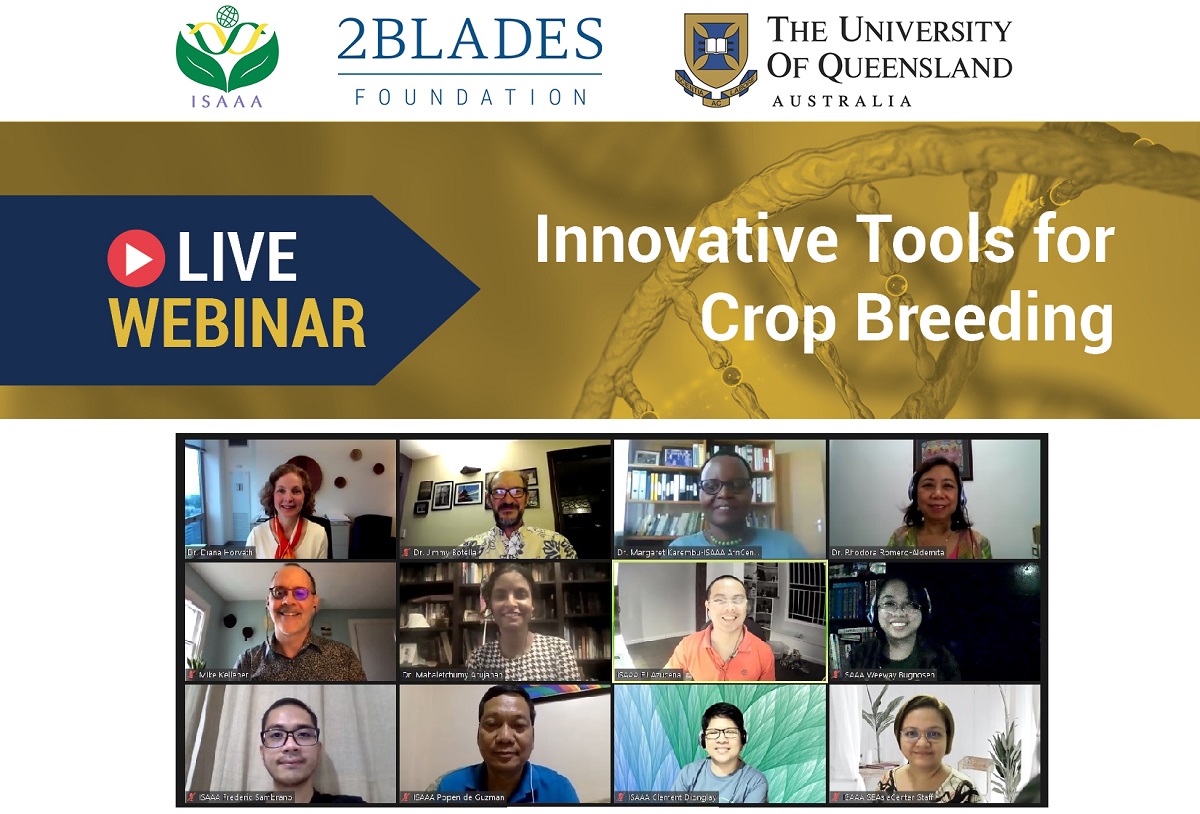 As ISAAA continues its mandate to popularize different agricultural biotechnologies being developed around the world, its latest webinar showcased two of the most recent developments in genome editing: TALENs and CRISPR. The webinar Innovative Tools for Crop Breeding held on March 25, 2021 aimed to explain to the public what these innovative breeding tools are and how they work, as well as to highlight their potential and benefits to global agriculture.

ISAAA collaborates with various organizations to identify the latest agricultural innovations being developed and introduce them to different stakeholders through a number of media platforms. One of these partners is the 2Blades Foundation, a non-profit foundation that aims to translate advanced knowledge of plant sciences to crop disease solutions to improve agriculture and food security. Both ISAAA and the 2Blades Foundation share the vision of getting the latest innovative breeding technologies known to the public and make these accessible to beneficiaries who need them the most. Dr. Diana Horvath, President and Director of the 2Blades Foundation, was one of the resource speakers during the webinar.

Horvath presented the genome editing tool TALENs, or transcription activator-like effector nucleases. TALENs are protein combinations made up of two parts: a TAL Effector (TALE) DNA binding domain that targets the protein to a specific DNA sequence, and a nuclease (N) that cuts the DNA. One of the highlights in Horvath’s presentation was about delivery systems in TALENs. She was then asked during the open discussion what measures were done to obtain delivery systems and off-type reduction. Horvath explained, “For any type of gene editing tool, there is a lot of research on how to deliver them and how to make sure they don’t include a transgene. So, if you can have transient delivery especially of proteinaceous compounds into the cell, then that’s a great step forward.” She added that it was also important to try to avoid any foreign sequences in the process.

Dr. Jose Botella of the University of Queensland tackled CRISPR, short name for clustered regularly interspaced short palindromic repeats. Botella showed animated illustrations to demonstrate how CRISPR works. During the open discussion, Botella was asked how it was possible to target several parts of a genome to knock them out using CRISPR, and if a sequence targets many different sites. Botella answered that multiple target sequences can be produced. “Put it in one cassette. It can work very well. Use a single target to knock out the same gene in all the different genomes. You can do this in one single blow,” he explained.

The resource persons were also asked about the factors that can help new researchers determine which between TALENs and CRISPR to use for genome editing. Horvath answered, “They are both very effective platforms that can be used for gene editing. There are probably individual cases where one may perform better or differently than another.” She added that one consideration is whether the work is for commercial development or research. With commercial development, access to intellectual property rights needs to be considered. For research, Horvath said that the two gene-editing tools perform differently in different crops and for specific tasks, such as targeting organelles. She added that reviewing the existing literature about genome editing can help guide which platform to use. Botella echoed Horvath’s answer by stating, “Technically, there is no comparison. CRISPR may be the way to go because of technical simplicity. TALENs would be more precise.”

Horvath and Botella agreed that genome editing will not outperform genetic engineering or make the latter obsolete. Horvath explained, “Gene editing can do a lot of things that we can’t do within other approaches. It has many positive features but it can’t do everything, particularly the example of disease resistance where the best way of making long-lasting resistance is to bring in more resistance genes.” Botella agreed by saying, “There are things that can be done with genetic modification and cannot be done with genome editing, that’s clear.” Horvath summed it up by saying, “It’s important for scientists to talk about the fact that all tools have a role to play" and "can be put to use for agriculture.”

Head over to the ISAAA YouTube Channel to watch the full webinar complete with presentations and open discussion about TALENs and CRISPR.